The Commanders’ receiving core might be taking the shape of one of the best in the league, at least according to former Washington Super Bowl champion QB and NFL MVP Joe Theismann.
Listen now to WTOP News WTOP.com | Alexa | Google Home | WTOP App | 103.5 FM

Theismann: Commanders’ receiving core as good as any in NFL originally appeared on NBC Sports Washington

Washington’s win on Sunday vs. Jacksonville gave fans a glimpse of something that hadn’t seen in some time: a healthy, dynamic, three-headed receiving core. Quarterback Carson Wentz spread the wealth between the trio of Terry McLaurin, Curtis Samuel and Jahan Dotson, as each of the wideouts snagged at least one touchdown on the day (the rookie Dotson caught two).

A quarterback with a strong arm with targets like those three is an appetizing situation for any offense, and especially for a team that has been in the bottom half of the NFL in passing yards for every season since 2017.

The Commanders’ receiving core might be taking the shape of one of the best in the league, at least according to one former quarterback.

“I’d match our young wide receiving core up against pretty much anybody, as a whole, in the league,” Theismann said on 106.7 The Fan on Wednesday. “I mean, really think about it. Curtis had an unbelievable [game]. This is what was missing a year ago.”

It’s true that last season, with Samuel dealing with nagging injuries the whole year and Dotson still at Penn State, the brunt of the receiving work essentially fell on McLaurin’s shoulders. He made the best of the situation, though, posting over 1,000 receiving yards despite shaky quarterback play.

Now, Samuel is healthy and Dotson posted two receiving touchdowns in his first meaningful NFL game. Yes, the trio has only shared the field for 60 minutes, but it’s an encouraging trend.

Coaching has something to do with their output, too.

“I think Scott Turner did a terrific job of orchestrating an offense and creating opportunities for players,” Theismann said. “Got the ball out of Carson’s hands quick, gave him confidence and you could just see it grow and grow and grow.

“It’s not like it’s a new experience for him and he’s gonna run on these ebb and flows. He’s gonna stay pretty much consistent, and the one thing I was really impressed with is he didn’t make any decisions trying to make too much out of a play.”

Wentz ended the day going 27-41 for 313 yards and four touchdowns despite two consecutive interceptions. Last season, Washington only threw for over 300 yards in a game one time. In fact, you’d have to go back seven years to find the last time a Washington quarterback had 300+ passing yards and four passing TDs in a game.

Kirk Cousins threw for 365 yards, four touchdowns and zero interceptions in the then-Redskins’ 38-24 win over Philadelphia on Dec. 26, 2015. Washington clinched the NFC East that night.

Wentz looked sharp and so did his receivers in Week 1. Dotson’s miracle catch for the fourth touchdown of the day was especially notable.

“The catch by Jahan was terrific, but the only place Carson could’ve put the ball was where he put it on the inside,” Theismann said of the game-winning grab.

The Commanders face a tougher test in Week 2, though, as they face a gritty Detroit squad. The Lions gave up 38 points to Philadelphia last week, but only with 243 passing yards and zero touchdowns. Time will tell if Washington’s offense can continue its torrid streak in the air. 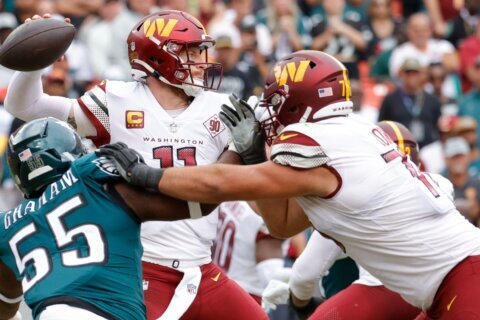