If you're not the biggest hockey fan but want to get in on the Capitals' quest for back-to-back Stanley Cups, here are the answers to the questions you're probably too afraid to ask about the NHL's Stanley Cup Playoffs.
Listen now to WTOP News WTOP.com | Alexa | Google Home | WTOP App | 103.5 FM

For the first time in 45 years, the Washington Capitals are defending a Stanley Cup championship. Yes, many die-hard, long-suffering Caps fans had their faith in the team justified, but there were plenty of new hockey fans that jumped on the bandwagon — and some may need a little help catching up to the die-hards.

That’s where we come in. Here’s a guide to some of the questions you may have been too afraid to ask your buddy who “Rocks the Red” at all times and wears face paint to games.

When do the playoffs start?

Day 1 of the 2019 Stanley Cup Playoffs is Wednesday, April 10. The Caps start their title defense with Game 1 of their series against Carolina on Thursday, April 11.

How can I watch the playoffs?

For tickets to Capitals games, you can go their website.

Who’s in the playoffs?

The top three teams from each of the four divisions go to the playoffs, along with two wild cards in each conference, regardless of division.

In the Eastern Conference, the Tampa Bay Lightning won the Presidents’ Trophy (best regular season record) and the Atlantic Division. The Boston Bruins and Toronto Maple Leafs are second and third in the division, respectively.

The Capitals clinched their fourth straight Metropolitan Division title. The Islanders, coached by former Caps coach Barry Trotz, are second-place in the division, and the Pittsburgh Penguins are third in the division.

The Carolina Hurricanes ended the NHL’s longest postseason drought by clinching the first wild card spot, which gave them the match-up with the Caps. Columbus was the second wild card team, and the Blue Jackets face Tampa Bay.

In the Western Conference, the Calgary Flames clinched the Pacific Division along with the best record in the conference. The San Jose Sharks and Vegas Golden Knights were second and third in the division.

The Nashville Predators won the Central Division by one point over the Winnipeg Jets and the St. Louis Blues, who finished with 99 points apiece. The Jets were the higher seed due to the tie-breaker.

There are four rounds of best-of-seven series played in a 2-2-1-1-1 format — meaning the team with home-ice advantage plays the first two games at home, and Games 5 and 7, if necessary.

Who do the Capitals play first?

The Caps will face the Carolina Hurricanes in the First Round of the Stanley Cup Playoffs.

Game 5 is set for Saturday, April 20, at 8 p.m. at Capital One Arena. See the full series schedule.

This marks the first time the Capitals will face the Hurricanes in the playoffs, although the teams have been divisional rivals since the 1998-99 season.

What do the Capitals need to do to repeat as champions?

If the Caps win four games in the second round, they would advance to the Eastern Conference Final. The Capitals would have home-ice advantage over the Toronto Maple Leafs or the wild card team, but not against the Tampa Bay Lightning or Boston Bruins.

How do I get to the games via public transit?

Here’s what you’ll need to know if you’re taking Metro. 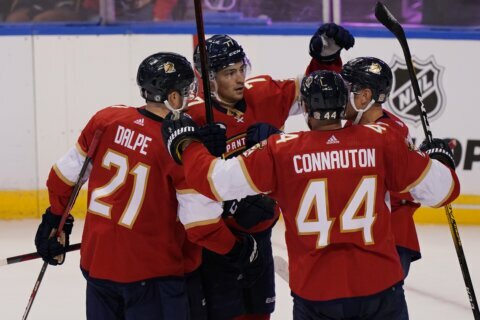