With Mike Richards expected to make his Capitals debut Saturday in Buffalo, it appears as though Brooks Laich will be the odd man out.
Listen now to WTOP News WTOP.com | Alexa | Google Home | WTOP App | 103.5 FM

WASHINGTON — With Mike Richards expected to make his Capitals debut Saturday in Buffalo, it appears as though Brooks Laich will be the odd man out.

Based on reports from Washington’s morning skate at First Niagara Center, Laich is expected to sit as a healthy scratch, while Richards centers the fourth line alongside Zach Sill and Michael Latta.

Laich has been limited to just one goal and four assists in 43 games this season, playing primarily on the fourth line and on the penalty kill. The 32-year-old is averaging 10:51 of ice time per game, the lowest total in any of the 11 NHL seasons.

Once a key cog within the organization – Laich signed a six-year, $27.5 million deal in 2011 – the veteran of 725 career games in a Capitals sweater will sit as a healthy scratch for just the third time since his rookie season.

Few players on the Capitals have a better appreciation for both the trials and tribulations and the successes the team has experienced over the last 12 years than Laich. The former Ottawa Senators prospect was traded to the Capitals in Feb. 2004 in a deal involving former Capitals legend Peter Bondra. Laich has remained with the organization ever since, and he is currently the longest tenured pro athlete in D.C.

Richards, 30, signed with the Capitals on Jan. 6 after having his contract with the Los Angeles Kings terminated last summer. He went unsigned in the fall after being charged with possessing a controlled substance at the Canadian border.

The two-time Stanley Cup champion began skating and practicing with the Capitals on Jan. 8, while working himself back into game shape.

The Capitals (33-7-3) have the best record in franchise history through 43 games and they enter play Saturday on a five-game winning streak. Braden Holtby is 20-0-2 in his last 20 decisions, and Alex Ovechkin ranks second in the NHL with 26 goals. 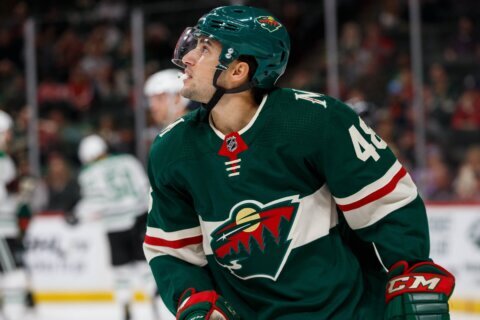