Teachers and other government workers in Virginia would get some type of raise under budget bills approved Thursday by the House and Senate.

The bills would also result in money becoming available to launch online sports betting and lottery sales, and the state would take a harder look at improving transit along U.S. Route 1 or Interstate 95 from Franconia-Springfield to Stafford.

The two chambers now have two weeks to work out agreements on precise spending amounts, the different ways they address things such as pay raises, and amendments to Gov. Ralph Northam’s proposed budget that were only approved in one chamber or the other.

Both chambers included funding to cover state costs for minimum wage increases that are working their way through the General Assembly, to allow driver’s privilege cards for noncitizens who pay Virginia taxes to move forward, and to raise cigarette and nicotine taxes.

The bills also call for a study on establishing a paid family and medical leave program for all Virginia employers that could be considered in next year’s General Assembly session.

Both chambers also included additional funding for Capitol Police, which is tied to increased security at the state Capitol this session due to tighter rules imposed by the new Democratic majority and threats against some members.

The budget is balanced, but House Republican leaders expressed concern in a statement on how funding might be handled in the event of an economic downturn.

The House passed its budget bills 67-32 and 75-24. The Senate passed both of its budget bills 29-11. Democrats have slim majorities in each chamber, so the votes included bipartisan support.

The budget must be finished within the next two weeks so that the General Assembly can send a final version to the governor before session ends March 7.

Lawmakers will return for a one-day session in April to consider any vetoes or amendments.

Under the House plan, teachers and other similarly situated workers would get 2% raises this summer and another 2% raise in summer 2022, as long as their local school systems match the salaries.

The House would fund separate State Police salary increases of 2% effective June 10, with an additional increase based on each consecutive year of service.

Local registrars, sheriff’s deputies and others would get a 1% raise. Many other state workers would get 2% raises.

Some other state workers would get a one-time bonus of 1%.

The Senate budget is proposing higher increases in teacher pay, including a 4% raise in July 2021.

State workers would get a one-time 3% bonus in December and a 3% raise effective June 2021.

Adjunct faculty at public colleges would also get a bonus, then a raise under the Senate plan.

Sheriff’s offices would see employees get a $200 one-time bonus in December.

Virginia will study better transit options from Franconia-Springfield to Quantico under language included in the budgets from both chambers.

The study, identified in the Senate budget as an examination of extending Metro’s Blue Line to Prince William County, is much more likely to support an extension of Fairfax County’s planned Route 1 Bus Rapid Transit System farther down Route 1.

The state is also already advancing a plan to significantly expand Virginia Railway Express Fredericksburg Line service in the corridor.

The actual study will “evaluate enhanced public transportation services from the Franconia-Springfield Metro station to Fort Belvoir, Lorton, Potomac Mills, and Marine Corps Base Quantico in Prince William County, including the cost and feasibility of extending the Blue Line and other multimodal options such as bus rapid transit along Interstate 95 and U.S. Route 1.”

Fairfax and Prince William counties would have to match state funding for the study, which would be completed by December 2021.

Another House budget change that would affect commuters on the Interstate 66 corridor would bar the Virginia Department of Transportation from charging people with an E-ZPass Flex a fee for failing to frequently use the device.

Currently, the devices are free only if they are used in HOV mode for a free ride every six months.

Northern Virginia school systems would get more money to pay staff under cost of competing adjustments, under a $9.5 million per year House proposal to partially restore funding that was cut several years ago.

Statewide, the House budget would add at least 300 pre-K slots for at-risk 3-year-olds and 4-year-olds.

The governor’s proposed free community college program for degrees in in-demand fields is also moving forward, although the details have been tweaked.

All public colleges would get money under the House budget aimed at keeping undergraduate tuition flat in the first year of the budget, and limit increases to 2% in the second year.

The Senate budget would provide $27.5 million more per year for elementary and secondary school construction or other systems improvements.

The state would also spend up to $100,000 to look into any inherent biases that may prevent minority candidates from becoming teachers.

The Senate also estimates a $2.2 million annual cost to the state if immunization standards are brought up to meet Centers for Disease Control and Prevention guidelines, because the state would need to buy more vaccines.

The House budget strikes language that would prevent the state from contributing additional money toward Alexandria’s massive sewage outfall cleanup project that is currently being paid for largely by city water and sewage rate payers.

The House also includes some funding to help build the Turning Point Suffragist Memorial in Lorton and to work on the Women in Military Service for America Memorial in Arlington.

The House budget includes $1,330 per year to support the preservation and care of historical African American graves at Calloway, Lomax and Mount Salvation cemeteries in Arlington, and restores statewide funding of $83,570 per year for Confederate cemetery maintenance.

The House plans to put $2 million toward replacing the state’s voter registration system, to provide $10 million to Virginia Beach to rebuild the facility where last year’s mass shooting happened, and to create a commission to investigate the shooting.

The Senate budget includes $700,000 in grants for local training on implanting extreme risk protection order laws, also known as “red flag” laws, that allow guns to be temporarily removed from someone who poses a risk to themselves or others.

The budgets also remove the originally proposed 18 positions tied to a proposed ban on assault weapons that has been rejected by lawmakers.

Both chambers would expand disability waiver programs for Medicaid treatment and provide for a new Virginia health insurance exchange.

The Senate proposes $5 million for emergency shelter upgrades, dental coverage for Medicaid patients, $500,000 a year for a new Virginia Sickle Cell Patient Assistance Program, and additional funding for the Board of Pharmacy to regulate five THC-oil producers.

A broader joint committee would look over the next year into how lawmakers might legalize marijuana in the 2021 session.

The Senate also calls for a study of the impact of minimum-wage increases on Medicaid costs.

The House would eliminate inmate medical care co-payments, which, at $5, are beyond the reach of people who are paid pennies an hour for their prison jobs.

The House also included $50,000 to develop interpretive signs on the history of Virginia’s Massive Resistance to school integration that will be installed next to the statue of Gov. Harry Byrd Sr. in Capitol Square.

A number of changes to the introduced budget also address criminal justice reforms, and enforcement of expanded consumer, worker or anti-discrimination protections. 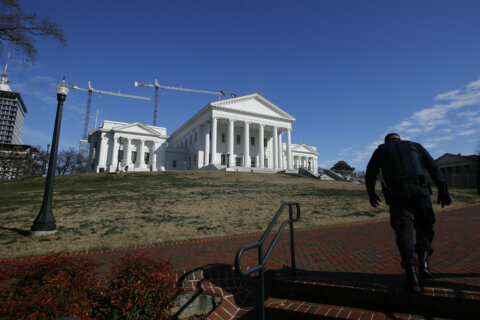