The bills were among dozens passed Monday as part of a rush of bills ahead of a Tuesday night legislative deadline. Here's what to know.
Listen now to WTOP News WTOP.com | Alexa | Google Home | WTOP App | 103.5 FM

The bills, among dozens passed Monday as part of a rush of bills ahead of a Tuesday night legislative deadline for bills to pass in at least one chamber to remain alive for the year, would provide for up to a dozen permits for companies that will follow the rules and maximize state tax revenue.

Applicants to run websites and/or apps would pay $250,000 up front, plus 20% of adjusted gross revenue to the state.

An actual, physical sports book facility would be limited to a “major league sports franchise” that plays at the highest level in its sport. The provision is believed to be intended to offer the Washington Redskins the opportunity to run their own gambling facility.

The General Assembly is separately advancing casino legislation that could allow five casinos in various locations outside of Northern Virginia, and is considering regulation of “skill games” to allow the slot-like devices at truck stops.

Sports betting would be limited to people physically in Virginia who are 21 years old or older.

D.C., North Carolina and West Virginia are farther along in the legalization process.

Charity Texas Hold ‘Em events did not fare as well, with the Senate approving them, but the House rejecting legalization.

Here’s what else happened in the General Assembly.

Virginia will also likely decriminalize the possession of small amounts of marijuana this summer.

The House voted 64-34 Monday for its version of decriminalization, which would make possession of up to half an ounce of marijuana punishable only by a civil fine of $25.

The Senate version is slightly different, but the two chambers now have until March 7 to work out their differences and pass a final version of a bill that would be sent to Virginia Gov. Ralph Northam for his signature.

The General Assembly has also approved bills calling for a broader study over the next year of possible medical or recreational marijuana legalization, but supporters of the change see decriminalization as a first step.

In smaller steps, the Senate approved a waiver for nursing home staff to possess and administer THC oil, and the House is set to vote Tuesday to approve the sale of hemp products intended for smoking to anyone 21 or older.

Tax changes on the way

Big changes to how local schools and other parts of county budgets are funded are likely coming next year after years of pleading from county supervisors.

The Senate passed a bill Monday that would give counties the same authority as cities have to implement a variety of taxes.

The Senate bill includes caps on how much a county could tax cigarettes and some other things, and restricts counties from implementing a meals tax for six years.

Fairfax County voters rejected a meals tax on prepared foods in 2016 that would have helped fund county schools.

Currently, counties primarily raise revenue from property taxes, which is why local supervisors have long pushed for authority to raise other taxes so that homeowners do not face such steep annual increases.

The House is expected to pass its version of the legislation Tuesday.

“It is about regressivity and removing the burden on 70% of our population having to depend just on the real estate tax, and it’s also about school funding,” said Del. Vivian Watts, D-Fairfax County.

Counties would not be required to raise any other taxes but would get the option.

The funds could also be used to cover requirements instituted on the local governments by state officials that are not funded by the state.

A separate bill passed by the House on Monday would allow local governments to adopt a 5-cent fee for plastic grocery bags, just like the taxes in place in D.C. and parts of Maryland.

The fee would cover plastic bags at restaurants, grocery stores, convenience stores and drug stores. As with the neighboring jurisdictions, 1 cent would be kept by the store and the remaining 4 cents would be used for water quality cleanup.

The Senate voted Monday to ban “bump stocks” and to create a voluntary “do not sell list” for firearms.

Sen. Scott Surovell, D-Fairfax County, said the “do not sell list” would allow people who know they may be a risk to themselves to ensure they do not buy a gun.

Though many other gun bills prioritized by the new Democratic majorities have already passed, the House plans to take up a final measure Tuesday that would restrict large-capacity magazines.

The Senate killed its broader version of an assault weapons bill earlier in the session.

The House bill would make it a misdemeanor to have magazines that hold more than 12 rounds, and restrict the sale or transfer of certain guns except for gifts to family, inheritance or temporary lending a gun to someone the owner is with.

The House approved a bill that would allow same-day voter registration at the polls on Election Day.

The House and Senate each plan to consider redistricting legislation Tuesday related to how Congressional and General Assembly lines will be drawn next year.

Also Tuesday, the House is expected to vote on a bill that would extend the close of polls on Election Day from 7 p.m. to 8 p.m.

It is not clear that the Senate would approve such a plan without funding to cover the costs.

The House voted 97-2 to require teachers be trained on crisis prevention, de-escalation and use of restraint.

The House also endorsed implicit bias training for school resource officers, more teachers for English language learners and an examination of ways to get more minority students into gifted and talented programs.

The Senate approved a bill similar to one already approved by the House that will end criminal arrests of kids in school for disorderly conduct so that they can stay out of jail and instead be disciplined by the school.

The Senate also voted to expand the use of school security money.

Under another bill passed by the House, prison officials could no longer strip search kids under 14 who are visiting jails, and would bar officials from permanently banning 14- to 18-year-old visitors who refuse a strip search.

In other measures, the House would block public colleges other than the Virginia Military Institute from asking on applications about criminal history. The schools could ask later in the process.

The Senate passed a bill 19-19-1, with Lt. Gov. Justin Fairfax voting “yes,” to add some additional restrictions on tethering animals outdoors to protect the animals in extreme weather or overnight.

The Senate also voted 31-8 to ban direct public contact with dangerous captive animals such as bears, lions, nonhuman primates or tigers, and 23-16 to study a plan over the next few years that would put up more fences to keep animals, such as deer, off highways in key corridors to drive down the number of serious crashes.

The House voted 77-19 to give petting zoos and similar businesses immunity from liability if visitors get sick. 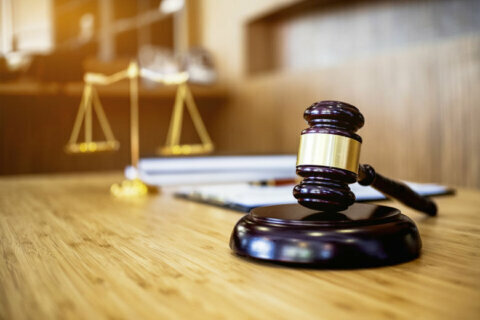