Holidays: 'Enchant' shines with millions of lights in Nats Park | Where to see holiday lights | Send in photos of decorations | How to give greener this season
Home » Virginia News » Va. Lt. Gov. Justin…

WASHINGTON — Virginia’s Lt. Gov. Justin Fairfax, who would become acting governor if Northam were to resign or be removed from office, has issued his statement regarding a racist 1984 photo in a medical school yearbook on Northam’s page.

If Northam were to resign — though he has stated that he intends to stay on until the end of his term — 39-year-old Fairfax would become the commonwealth’s 74th governor and the second black governor in the state’s history after former Gov. Douglas Wilder.

There is no place for racism in America. Governor Northam has lost all moral authority and should resign immediately, Justin Fairfax is the leader Virginia needs now.

While Fairfax’s statement does not directly call for Northam’s resignation, it does say that Fairfax “cannot condone the actions from (Northam’s) past, that, at the very least, suggest a comfort with Virginia’s darker history of white supremacy, racial stereotyping, and intimidation.”

Fairfax, who is a descendant of slaves and was raised in Northeast D.C., graduated from Duke University and Columbia Law School. Before becoming lieutenant governor, he worked for Tipper Gore during her husband Al Gore’s presidential campaign, and was a staffer in 2004 for then-Sen. John Edwards, a North Carolina Democrat.

History repeats itself. I will be stepping off the dais today in protest of the Virginia Senate honoring Robert E. Lee. I’ll be thinking of this June 5, 1798 manumission document that freed my great-great-great grandfather Simon Fairfax from slavery in Virginia. #WeRiseTogether pic.twitter.com/tG0QB9hHdR

Fairfax also spent two years as a federal prosecutor in Alexandria. In 2013, he was awarded the National Bar Association’s “Nation’s Best Advocates Award,” according to his website.

He was elected as Virginia’s lieutenant governor in 2017 after defeating Republican Jill Vogel.

Fairfax is known for taking a more progressive economic stance than Northam and Attorney General Mark Herring. During his campaign, he stated that he would raise the minimum wage and advocated for more workforce training.

Fairfax has opposed natural gas pipelines proposed in the past. In regards to gun laws, he hopes to ban high capacity magazines, bump stocks and assault-style rifles, as well as supports universal background checks. Fairfax also attacked Vogel for introducing a bill requiring transvaginal ultrasounds for women in order to have an abortion.

The lieutenant governor post is considered a part-time job. Fairfax’s website says that “he currently works as a Litigation Partner … for international law firm Morrison & Foerster LLP.” He lives in Northern Virginia with his wife, Dr. W. Fairfax, DDS, and their son and daughter, Cameron and Carys.

Even if Northam does not resign, as lieutenant governor, Fairfax will automatically become a contender for governor in 2021. 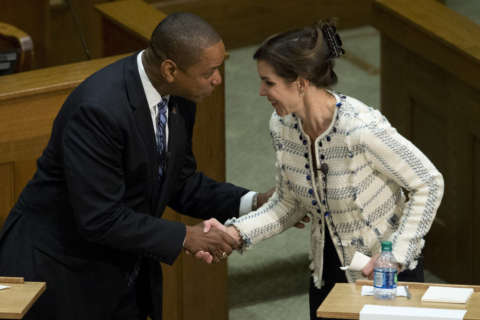