The National Weather Service determined that at least five tornadoes touched down near Richmond on Monday afternoon. By late Tuesday, tornado damage was confirmed on the west side of the city and in the suburbs of Tuckahoe, Midlothian, Bon Air, Rockville and Hampton Park.

Monday’s tornadoes came 14 years to the day after Virginia’s largest tornado outbreak on record. On Sept. 17, 2004, the remains of Hurricane Ivan spawned more than three dozen twisters across Virginia and Maryland.

An official with the Chesterfield Fire and Rescue Department reports one person died following a warehouse collapse. Video captured a tornado tearing the roof off of the Old Dominion Floor Company near U.S. Route 360. Debris could be seen swirling several hundred feet into the air. The weather service gave the tornado a preliminary rating of EF-2 and estimated its winds were around 120 miles per hour.

The preliminary assessment by the weather service determined that the tornado tracked more than 7 miles from outside of Winterpock to the Bon Air area.

It’s Virginia’s first tornado death since February 2016, according to the National Climatic Data Center. Governor Ralph Northam extended his heart to the family, as well as his thanks to first responders.

I want to take time to thank our local governments and first responders for their dedication to keeping Virginians safe as storm impacts turned to the Commonwealth today. Our hearts are with the family who experienced the loss of a loved one.

The weather service said another twister with winds estimated between 90 and 100 miles per hour struck the town of Hampton Park, Virginia, about 20 miles southwest of Richmond. The tornado tracked roughly 9 miles through Chesterfield County.

A tornado warning was issued for Chesterfield County at 2:52 p.m. The warning stated damage to roofs, windows and vehicles would likely occur.

Weather service crews determined that a third tornado touched down on the western side of Richmond just after 3:30 p.m., tracking nearly four miles into the nearby town of Tuckahoe. The tornado was given a preliminary rating of EF-1 with estimated winds as high as 95 miles per hour. Numerous trees were uprooted and pushed into houses, the survey found. An air conditioner unit was blown off the roof of a church.

A fourth tornado was confirmed near Rockville, Virginia, about 20 miles northwest of Richmond, where a shed and outbuilding were destroyed. It was given an EF-1 rating.

A separate swath of tree damage in Powhatan County was also attributed to a weak EF-0 tornado.

View a map of the tornado reports below. 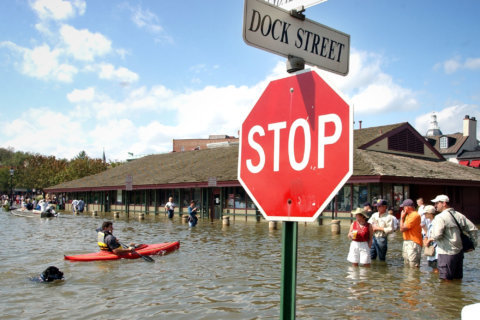 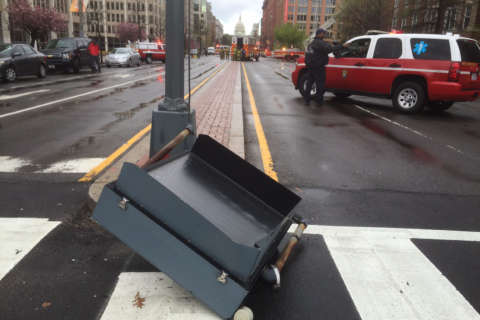 Only on WTOP: Most common – and most wacky – forms of local road debris