A Virginia Tech shooting survivor, who is now the executive director of a nonprofit, finally met the first responder who helped her when she was shot on April 16, 2007.
Listen now to WTOP News WTOP.com | Alexa | Google Home | WTOP App | 103.5 FM

ALEXANDRIA, Va. — The executive director of a nonprofit dedicated to school safety and violence prevention has unique insight on the issue: She’s a survivor of the Virginia Tech shooting that left 32 people dead on April 16, 2007.

Kristina Anderson heads the Koshka Foundation for Safe Schools, and she was in Alexandria, Virginia, this week to take part in a conference on school safety. The theme: resiliency and recovery.

A vibrant presence who greeted others with smiles and handshakes, Anderson said she was excited to take part in the conference where school administrators and first responders would have a chance to hear about prevention and recovery strategies.

Also sharing the stage with Anderson at the conference was Jason Dominiczak, who was then a student and the first tactical medic on the scene of the 2007 shooting on the Virginia Tech campus.

Dominiczak said when mass shootings happen, communities become the nucleus of a whirlwind of activity. He recalled the days following the initial shooting at Virginia Tech, when the tight-knit community of Blacksburg, Virginia, was flooded with reporters and media satellite trucks became fixtures in town.

“And then a month later, two months later, everyone’s gone,” he said. Long after the initial coverage ends, the healing process for communities begins, sometimes in fits and starts.

For Anderson, who now makes her home on the West Coast, she said that as the foundation’s executive director, she’s become accustomed to speaking about the trauma she experienced during and after the shooting at Virginia Tech.

But she did get one surprise before the presentation, and she included it in her speech.

During her account of being shot three times in a classroom in Virginia Tech’s Norris Hall when she was 19-years-old, Anderson singled out a man in the audience for special recognition.

“Curtis, would you say hello?” she asked, as a man in a green polo shirt stood up.

Standing on the stage, gesturing toward the man, Anderson continued, “Curtis and I met for the first time on April 16 — when he carried me outside of Norris Hall.”

There were audible gasps, and then applause followed as the conference attendees rose for a standing ovation.

Curtis Brown was among the first responders from the Christiansburg, Virginia, police department. He recalled cradling an injured Anderson and carrying her to the grass outside the campus building.

“Since the first time I carried her and handed her to the other guys, this is the first time I’ve seen her,” he said, shaking his head at the contrast between the terror and chaos of that morning, and the warmth of their meeting years later.

They had initially connected on Facebook, Brown said. And now, meeting Anderson for the first time and seeing her speak — a bright, confident young woman full of life — brought a smile to his face.

“I’m just so proud of her,” he said. “She’s like one of my daughters. She’s just awesome.” 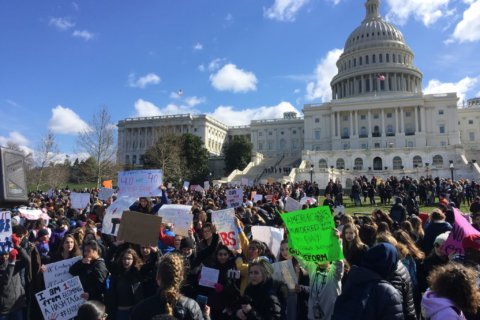