Will ‘digital slugline’ Uber Commute catch on in Virginia?

Uber is launching a pilot program that aims to cash in on Northern Virginia's slugging culture. The company's new app will pair up riders and drivers who are heading in the same direction during rush hour.
Listen now to WTOP News WTOP.com | Alexa | Google Home | WTOP App | 103.5 FM

WASHINGTON — Uber is launching a pilot program that aims to cash in on Northern Virginia’s slugging culture.

Uber is getting ready to test out a new carpooling option called Uber Commute. The company’s new app will pair up riders and drivers who are heading in the same direction during rush hour. The pilot program will only be for specific routes: Interstate 395, Interstate 66 and the George Washington Parkway during rush hour.

Uber said you can think of Uber Commute like a “digital slugline.” Selecting Commute from the Uber app menu will match up drivers and passengers.

Kalai Kandasamy who has been slugging  since the early 2000s from Woodbridge, Virginia, has developed Sluglines.com and the Sluglines app.

“I don’t see that for a daily commute (Uber Commute) is going to work,” said Kandasamy.

He said that if drivers have to stop and pick up people at different locations during rush hour, it will add more time and stress onto their already tough commute.

While slugging is free, “Uber is going to cost the riders,” said Kandasamy. 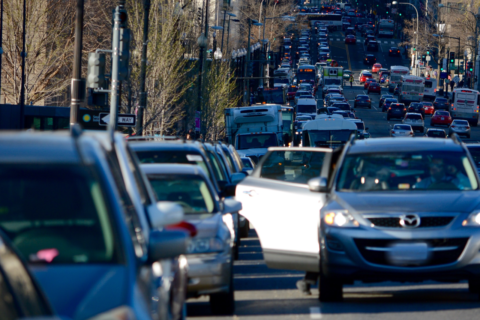