FAIRFAX, Va. — Three Republicans, very different in personality, are hoping to succeed Virginia Gov. Terry McAuliffe when voters head to the polls this year. The primary is set for June 13 and, with campaign season picking up in Virginia, all three of them are crisscrossing the state trying to drum up votes.

Ed Gillespie is the presumed front-runner based on his national profile, background as a former chairman of the Republican National Committee and one-time adviser to President George W. Bush.

In 2014, he challenged U.S. Sen. Mark Warner, D-Va., and while he lost, the margin was a lot closer than was expected. That propelled him into this race.

“I’ve got a specific plan to get Virginia moving again,” said Gillespie, shortly after winning the Fairfax County GOP straw poll on Saturday. “We’ve got to reform our tax code and we need lower tax rates. I’ve put forward a plan to cut across the board our tax rates by 10 percent.”

In his stump speech, Gillespie said the Republican orthodoxy he’s proposing will provide a major boost to the economy in the commonwealth.

“It would create over 53,000 good paying, full time, private sector jobs,” argued Gillespie. “And it would allow for hard working Virginians who have had stagnant wages and higher costs for the past many years to have $1,300 almost in their pockets this year.”

Gillespie concedes that number is based in part on dynamic scoring, which assumes a certain level of economic growth.

“When you look at the ratings just five years ago, we were number one on the CNBC list for best states to do business, and now we’re not even in the top 10.”

Similar to Gillespie, but much different in his bombast, is Prince William County Executive Corey Stewart.

“We’ve got to lower taxes,” said Stewart. “We have to make Virginia competitive again. Our tax rate is the same as Maryland’s. We have to end that. We’ve been losing tens of thousands of jobs to North Carolina because our income taxes are too high. As governor, I’m going to lower the income tax.”

But when it comes to improving the economy, State Sen. Frank Wagner takes a much different view of what needs to be done.

A graduate of the Naval Academy who later built his own shipyard in the Tidewater area, Wagner said it starts with education.

“We have set up an SOL (Standards of Learning) system that’s great if you want to go to college,” said Wagner. “But we’ve done it at the expense of any career technical education.”

He also said Virginia schools should start preparing students for some of them.

“I’ve worn a hard hat all my life, and not for photo ops. That’s what you do in a shipyard. I’ve worked around the shipbuilders, welders, pipe fitters, machinists, all my life. I have the deepest respect and admiration for those people. They do things I cannot do. We need to recognize them for the talent they have because these are the people that grow Virginia, these are the people who are going to put the infrastructure in we’re talking about.”

And while he was visiting Northern Virginia, Wagner couldn’t stop talking about the need to solve transportation issues in the region.

He was the only one willing to say, unprompted, it would take more money from the state to get things done.

“Gillespie proposes more public-private partnerships. That means more tolls. That means paying Wall Street more than you pay for the highway to get built,” said Wagner.

“What I propose is more funding for transportation through a fuels tax that’s higher while prices are low, but you’ll pay less if it ever gets back to four or five dollars per gallon.”

“We need money for transportation,” he went on to argue. “We have to build. So we’re either going to toll it or pay for it as we go,” he notes.

Wagner talked about commuters from Loudoun County, who he said pay “nine bucks each way” to drive to D.C. and back.

“If we’re not willing to pay for our highways like our parents did with the interstate highway system … you can expect more tolls, more delays, and for those who can’t afford the tolls or refuse to pay them, you can expect to be jammed in more heavier and heavier traffic in the non-toll lanes. I think that’s the wrong way to go.”

Wagner was also the only one who addressed Metro, and said money was going to be needed to pay for the maintenance and repairs — but only after Metro’s board was overhauled and the labor agreements with its union rewritten.

Wagner is the chairman of the transportation subcommittee on the state senate’s finance committee.

Stewart takes a different approach than Wagner, though he said he can find more money for state transportation funding.

At this point, Gillespie admits he doesn’t have a plan for transportation, but he said one will be coming.

“I’ve got a transportation policy working group,” said Gillespie. “I’m going to come forward, just as I did with my specifics on the tax cut plan, on transportation policies that will provide for congestion relief in Northern Virginia and infrastructure investment.

“I look forward to running on that plan,” he added, later promising that he’ll “roll out a plan on regulatory relief, education reform, reform of our state government, and I will roll out a transportation plan as well.”

Gillespie’s straw poll win in Fairfax County comes not long after winning a similar poll in Prince William County, where Stewart is the county executive.

At the Fairfax forum, both had strong support, though Stewart’s was more boisterous, if not greater in number. And he’s been taking shots at Gillespie, calling him “Establishment Ed” and a “cuckservative.”

“This is the language of the new conservatives who are coming up,” he said. “Some people don’t like it and that’s just fine. I’m going to work with every generation. All conservatives.

Asked about Stewart’s fiery language, Gillespie seemed to take it all in stride.

“People know me,” said Gillespie. “They know my policies. They know I’ll be an effective governor for us and I know how to get things done. The fact is this is an important election and they know the stakes are very, very high for Republicans in November. They know I can win this race.” 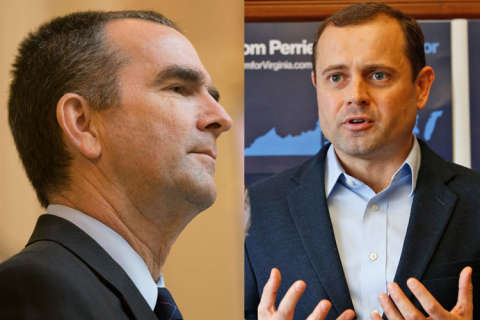 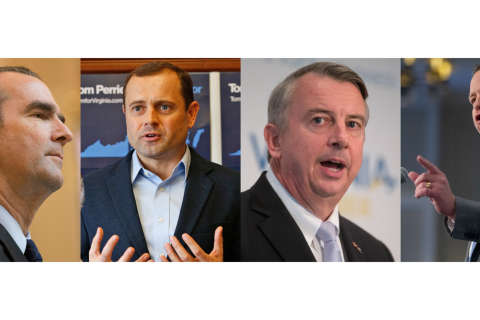 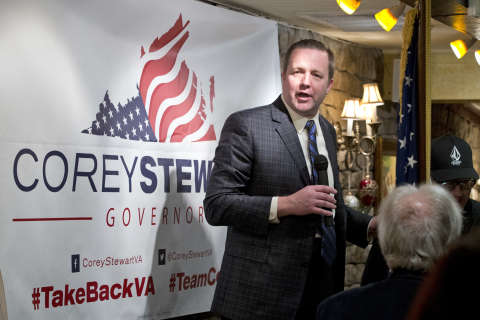