Emergency responders struck on scene of Beltway, other accidents

WASHINGTON — Among the many traffic accidents around the region, a major crash on the Beltway Inner Loop between River Road…
Listen now to WTOP News WTOP.com | Alexa | Google Home | WTOP App | 103.5 FM

WASHINGTON — Among the many traffic accidents around the region, a major crash on the Beltway Inner Loop between River Road and 270 spur shut down all lanes early Sunday morning,  and sent six people to area hospitals including two EMS workers.

According to Maryland State Police in a release Sunday morning,  a pickup truck on I-495 skidded over two lanes on I-495 and onto the shoulder, striking the two EMTs, who were assisting injured individuals from a previous crash. The truck also struck the pickup truck from that crash, and then the ambulance, before coming to a stop.

The driver of the striking vehicle is identified as Maximiliano A. Curcho, 34, Clarksburg, Md. He was also transported to Suburban Hospital.

The three people in the initial accident were transported to MedStar for treatment and it was not immediately clear whether they were injured additional in the subsequent incident.

It wasn’t the only accident due to the treacherous wind and road conditions overnight. Montgomery County Fire spokesman Pete Piringer  also reports a bus ran into first responders who were at an accident on University Boulevard near Lorain Avenue in Silver Spring, Maryland.  He says a Metro bus and Bowie State University bus were involved and no one sustained serious injuries. 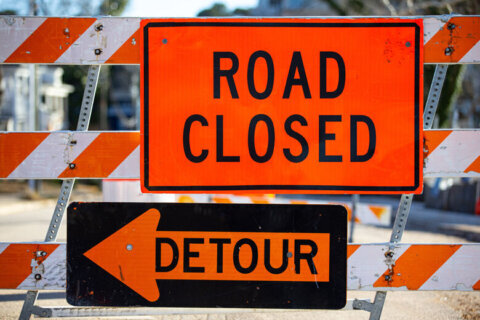 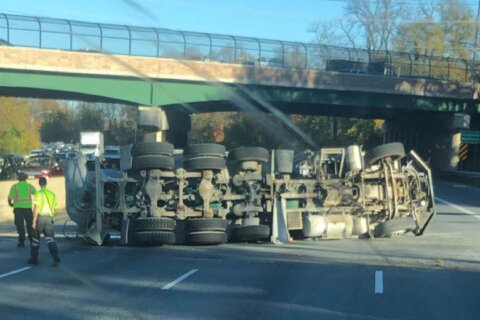