A presentation on what happened during a collision between two Metrorail trains raises questions on why one train was moving when it was not supposed to and how fast help arrived.
Listen now to WTOP News WTOP.com | Alexa | Google Home | WTOP App | 103.5 FM
(1/7) 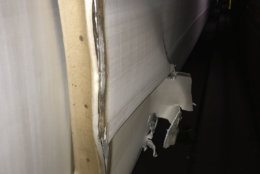 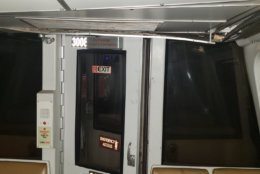 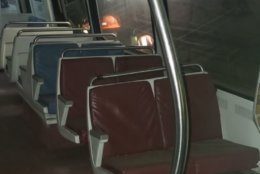 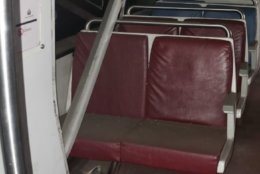 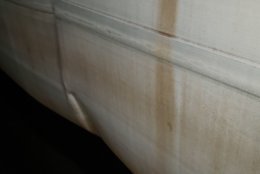 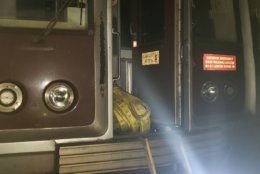 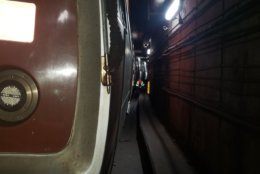 The crash of two out-of-service Metro trains early Monday morning was so forceful it knocked one train apart, crumpled the front of the train that was moving, and bent the pole at the front of that train.

New timelines also raise some questions about the timeliness of the response.

Photos and documentation from the Washington Metrorail Safety Commission and Metro staff, including from a preliminary Metro presentation Thursday to the Metro Board, indicate that the focus of the investigation is on why the train operator of the train that rear ended another train near Farragut West accelerated despite automatic systems indicating that the train should not be moved.

In that situation, the train operator is supposed to only move at slow speeds if granted verbal permission by rail controllers. Since the trains that collided were older models, there was no inward facing cameras recording what the operators were doing in the moments before the crash.

Metro Chief Safety Officer Theresa Impastato declined to say whether the moving train’s brakes were applied at any time immediately before the crash.

“I think it would be premature for me to answer that,” she said.

Trains are able to move up to 15 mph when operated in manual mode after automatic systems bring them to a stop.

Both train operators and others on duty at the time are expected to participate in follow-up interviews in the coming days or weeks.

About 10 minutes after the crash, according to Metro’s latest timeline, Metro said, its Rail Operations Control Center called 911 (around 12:57 a.m.) to report that at least one of the operators needed medical treatment.

A person familiar with the 911 call said the report included information that there had been a train collision in the tunnel closest to Farragut West.

Still, according to a timeline provided by D.C.’s Office of Unified Communications, the initial dispatch of D.C. Fire and EMS at 1:02 a.m., about five minutes after that call came through, was for a single injured person on a train, not the response that would be normally used for a train
collision.

In response to a second call from Metro placed at 1 a.m., a dispatch for a crash in a Metro tunnel went out around 1:05 a.m., according to the Office of Unified Communications, which led to Engine 16 arriving at 1:10 a.m.

The Office of Unified Communications also lists two calls from the D.C. fire liaison in the 911 center to the Rail Operations Control Center apparently seeking additional updates. One of those calls was made just before 1:03 a.m. and another just before 1:07 a.m.

There was also a Fire Department liaison in the control center at the time of the crash, a change made to improve communications after the deadly 2015 smoke incident near L’Enfant Plaza, but because that person uses different communications channels, it is unclear what role that person played in this incident.

The train operators were taken to the hospital at 1:59 a.m., more than an hour after the crash. Neither had life-threatening injuries, and both were released later the same day.

D.C. Fire and EMS remained on scene until 2:32 a.m., according to Metro’s timeline of events.

Metro General Manager Paul Wiedefeld declined to comment on the response timeline at this point.

“It’s still under investigation, those are the types of things we will be looking at,” Wiedefeld said.

The operators had each initially radioed in relatively calmly, with the operator of the moving train only acknowledging the collision after being asked by the Rail Operations Control Center.

The damaged trains remained in the tunnel for nearly 24 hours before Metro tried to move them, even though Wiedefeld said Metro might have had an opportunity to move them before the evening rush hour if safety were not such a big concern.

“There was perishable evidence that needed to be preserved, so we made the difficult decision to impact our service in order to collect that evidence, which we believe will help point us toward the causal factors so we can avoid recurrence,” Impastato said.

That need to precisely document the debris field, damage and track conditions was not the only reason the trains were left in place, creating more major crowding and delays for Monday afternoon’s rush hour.

“The other data point that went into the decision-making was the extent of the damage to the couplers and the fact that if you began to move … you would have now two incidents going on and really destroy service,” Chief Operating Officer Joe Leader said.

The railcars were eventually removed between 12:44 a.m. and 4:05 a.m. Tuesday. After track inspections in the area, Metro reopened the track at 6:45 a.m. Tuesday.

The cars are now in rail yards awaiting repairs once the investigation is complete. The roof of the lead car of the moving train caved in slightly around the operator’s cab; the side of the car also cut into the passenger area; and there are scratches and dents along the outside of the railcars.

“I believe they are [repairable], but we’ll see once we get into them in more detail,” Wiedefeld said.

Damage to couplers where cars connect is also likely, which can require significant work to fix. The exact amount of damage remains under review.

Metro officials heavily emphasized that all signals, radios and related systems appeared to be working properly throughout the incident. If there had been a failure of any of those systems, that would have been even more serious and could have triggered lengthy systemwide slowdowns for
inspections.

However, Wiedefeld called it “jumping ahead” to ask about why Metro is still operating only in manual mode a decade after Fort Totten, when automatic operations were suspended despite that not being the reason for the crash.

Metro is conducting the crash investigation under the oversight of the Washington Metrorail Safety Commission. Metro has also shared information about the crash with the National Transportation Safety Board. The investigation should be completed by the end of the year, Impastato said.

“We will see where this investigation leads us. And if there’s something that we need to do differently, obviously we’re going to do it,” Wiedefeld said.