Home » Tracking the DC Metro 24/7 » How are Alexandria commuters…

How are Alexandria commuters doing 3 days into Metro station closures?

The third workday into Metro's shutdown of the six stations south of Reagan National Airport, commuters are still working out the best way to get to work.
Listen now to WTOP News WTOP.com | Alexa | Google Home | WTOP App | 103.5 FM

As the line of passengers started to snake around the temporary platforms set up outside the Braddock Road Metro station, Ed Walsh was hot and frustrated. He pointed to other buses that were just idling across the way while he and a couple dozen others were waiting for a shuttle bus to Crystal City.

“It’s going to be a long, hot summer,” Walsh lamented. He admitted the idling buses weren’t part of Metro’s fleet, but it didn’t give him much solace while he stood in the hot, humid sunshine either.

Walsh was one of a few people who admitted to WTOP they haven’t figured out exactly how they’re going to commute to work every day yet. Some of the commuters had a few different choices they wanted to try out before settling on a set route, including Ed Simons.

“As people change their habits, one day will be better than another, in terms of bus crowding,” Simons predicted. “I found that DASH and Metroway and established bus routes have been better and more reliable than the interim shuttles.”

Simons was among those who didn’t get on the first shuttle to swing through the station.

“I’ve been switching it up each day and trying to decide which one is best,” Simons said. “Taking the Metroway, taking the local buses, taking the DASH bus. Today is my first day waiting for the Yellow Line shuttle; [I’m] trying to see how that goes today.”

While he didn’t wait as long as others, he was hopeful that crowded shuttle buses will get reinforcements soon.

But even if you didn’t have to wait long for a shuttle bus, you weren’t guaranteed to get to the Crystal City station quickly either. Michael DePalma said his commute to work has essentially doubled this week, thanks in large part to the traffic these buses are sitting in. 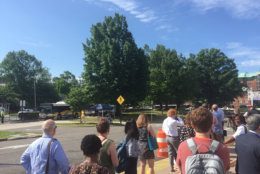 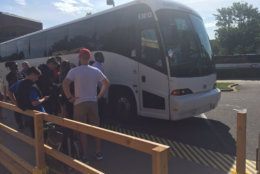 “That’s where it takes extra time,” said DePalma. “And then hopefully drivers will get more familiar with the route. Yesterday, the driver — if they are not familiar with the area it’s understandable — she missed two turns. She had to go around and it took one hour to get from here to Crystal City.”

DePalma, at least, was optimistic that things would be getting better.

“I have no doubt that they’re putting some effort in to improve the system,” he said.

“The bus rides feel forever,” said Eddie Altuna, who said he passes the extra time with a book he carried in his backpack. He admits his stories aren’t as filled with frustration and idling as others he’s heard, but he said “it feels like [Metro] were a little unprepared and I don’t know why.”

His commute to Capitol Hill has been lengthened by nearly a half-hour, he said, and he was starting to look into other options, such as slug lines and other means of mass transit. He was less interested in taking an Uber to work every day.

For now, he said, he’s waking up earlier than normal so that he can still get to work on time, and if he’s early, so be it.

“You don’t miss what you don’t have, but you definitely do miss what you did have,” Altuna said. “A lot of people complain about the Metro, but it’s something hopefully people won’t take for granted.” 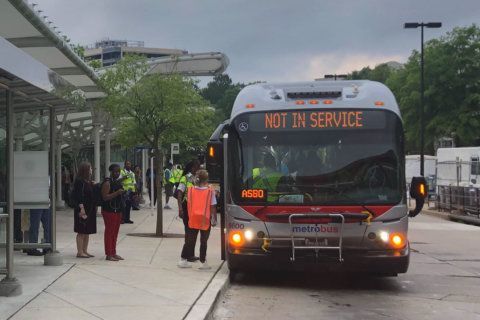