Metro expects to turn to state and local governments across the region to cover the costs of pay raises for workers an arbitration panel ordered last week, but the Metro Board chairman is warning of a more significant fiscal “ticking time bomb” just over the horizon.
Listen now to WTOP News WTOP.com | Alexa | Google Home | WTOP App | 103.5 FM

WASHINGTON — Metro expects to turn to state and local governments across the region to cover the costs of pay raises for workers an arbitration panel ordered last week, but the Metro Board chairman is warning of a more significant fiscal “ticking time bomb” just over the horizon.

“The big issue that they dodged is the pension, and I can’t stress this enough to the union, to the regional leadership, to anyone who cares about Metro: We’re going to go under. We’re not going to be able to survive,” said Metro Board Chairman and D.C. Council member Jack Evans.

“It’s not next year, it’s not even two, or three, or four years from now, but the exploding time bomb which is an unfunded pension liability that now is close to $3 billion will bring this system under,” he said in an interview.

“We believe the independent arbitration panel came to a rational decision, under the current circumstances,” ATU Local 689 said in a statement after the decision.

“Although, under normal circumstances, the totality of this decision would not be adequate, we are willing to accept the terms of this final and binding arbitration award for what we believe is in the best interest of the system,” the union said.

Metro had asked for no increases, while the union had asked for 4 percent raises, among other things. Metro also wanted to end pensions for new workers in its largest union and, instead, require them to contribute to an individual 401(k).

“At the end of the day, the unfunded pension liability will bring the system down, and how do I know that? Because it did it to the District of Columbia. It’s not an abstract concept,” Evans said.

The city’s pension liabilities and other financial problems drove the takeover by a federal control board from 1995 to 2001. The federal government assumed the city’s debts such as some significant pension obligations and implemented strict financial requirements for the city.

Under the arbitration panel’s ruling, Metro must pay any retroactive wage increases to workers still employed at the agency by the end of the year. Total through 2020, the increases for Metro’s largest union are estimated to be about $82 million, offset by $21 million in increased health care contributions from employees.

“Is there enough money to provide the pay raise? Yeah, probably. It’s $82 million over four years in three jurisdictions, so I’m sure we’ll be able to figure out how to make that happen,” Evans said.

He agreed the workers deserve a raise, but said it does not mean Metro has the money for it. Despite the ongoing contract negotiations then arbitration proceeding since the union contract expired more than two years ago, Metro did not have any kind of contingency in the budget to pay for even small wage increases.

“Paul [Wiedefeld] is going to have to take a look at it and figure out how to do this. I think the idea may be to go to the jurisdictions and ask for the additional money, because I think that was not part of the 3 percent cap that was put in place,” Evans said.

Maryland and Virginia included exceptions to new caps on operating subsidy increases for legal proceedings or disputes. Evans has not had further discussions since the arbitration award with either state as each jurisdiction works out how it will implement the new laws.

While the state government foots the bill in Maryland, and the District covers its cost, in Virginia, local governments are responsible for funding the system. They have expressed significant concerns about fitting any larger increases in Metro costs into their budgets.

Metro’s $2.8 billion unfunded pension and retiree health care liability — an estimate of the total amount Metro could need to pay over coming decades not just to members of ATU Local 689 — is in line with a number of other regional pension plans. The potential problems for Metro and other public pensions could get significantly worse in the event of an economic downturn.

Eliminating the benefits for new workers would only begin to bend the cost curve decades down the line, and could have little to no actual fiscal impact for years. Metro could pick up contributions to the pension program either way, but that would take money.

The transit agency did not pay anything into the pension plan for nearly a decade from 1999 through 2007, despite an agreement in the 1980s to cover contributions as a way of avoiding pay increases that would have further compounded over time. In the early 2000s, the agency instead relied on projections tied to the soaring stock market.

“You can blame what happened in the ‘80s, but we’re not talking about the ‘80s now, we’re talking about today, and the only way to fix it now is for every new employee we have to be in the 401(k) plan and not in the pension plan,” Evans said.

Metro has also failed to fund other post-employment benefits for retirees.

“There’s no way of fixing that. One way to stop the bleeding is so that you don’t have new employees coming in who are availing themselves of this, and then the region’s going to have to come up with billions of dollars of financing in order to pay for this, because it’s not going to be able to come out of Metro’s operating expenses,” Evans said.

“Metro, not now, but five years from now, will collapse,” he added.

In his typical dramatic style, he called on the region to add to the funding provided this year for capital improvements or to push the federal government to take over the costs.

“For Metro, which is really their creation, if they were to take over this unfunded liability, add it to the District’s and just pay it every year, eventually it goes away because you’re not adding anything new to the system,” Evans said.

“I’m putting everybody on alert that this is a ticking time bomb that’s out there that I can only imagine that the elected leadership in this region will just continue to ignore. Kick the can down the road, whatever you want to use as the analogy, that’s what we will continue to do, because that’s what we do, and it’s too bad,” Evans said.

Do new Metro cost caps include raises for workers? 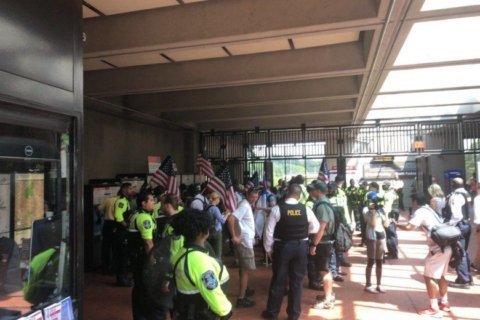