Metro once again has a short-term solution to the cooling problem at the Dupont Circle and Farrgut North stations -- and a more permanent fix is on the way and due to be installed in time for next summer.

WASHINGTON — After years of problems with the cooling system for the Farragut North and Dupont Circle Metro stations, a location has been identified for another temporary cooling tower, and plans for a permanent fix are in place.

The plan begins with the placement of a temporary cooling tower on Connecticut Avenue Northwest this week.

The temporary tower will be in the left lane of northbound Connecticut Avenue Northwest, instead of in a loading area next to the sidewalk, where it was placed last year. The location of the noisy tower had been a point of contention with neighborhood business owners and the District Department of Transportation.

The lane is expected to be closed Wednesday night, and the tower is scheduled to remain there until October. The two right lanes will remain open on Connecticut Avenue Northwest between L and M streets. DDOT expects delays for drivers to be moderate, with the lane closed through the fall.

During the lane closure, Metro plans to dig up part of the street to replace leaking pipes under Connecticut Avenue. between L and Desales streets in Northwest that have prevented the permanent chiller system from working properly since at least the summer of 2015.

A permanent fix to restore the connection to the cooling tower on top of a nearby building is expected to be completed this fall, which would restore the regular cooling system in time for next summer.

Metro spokesman Dan Stessel said in an email that the temporary cooling fix should have cool air flowing into the stations by next week.

Metro has a larger contract to replace a number of the chiller systems or cooling towers across its system. Many of the units have not been replaced since the transit system opened more than 40 years ago. 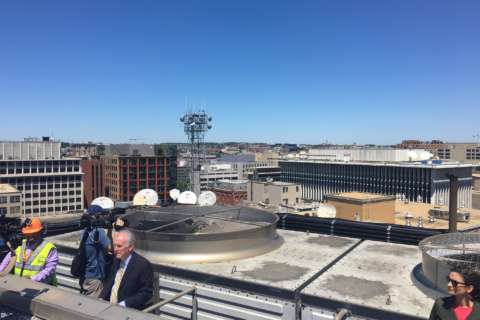