Metro's Finance Committee was told that track work, delays and increased competition from Uber and Lyft could play a part in driving riders away from the Metro system.
Listen now to WTOP News WTOP.com | Alexa | Google Home | WTOP App | 103.5 FM

WASHINGTON — A focus on rush-hour riders and off-hour fare hikes are driving riders away from using the Metro system for short trips while increasing the portion of trips taken by long-distance commuters, Metro’s Finance Committee was told Thursday.

With Metro also set to announce more round-the-clock work zones soon, and a significant drop in bus ridership since a fare hike last summer, Metro has built lower overall ridership projections into its budget proposal for the fiscal year that begins July 1.

The expected rail ridership drop mirrors some of the ridership declines during significant 24/7 work zones.

Metro Board Chair Jack Evans said riders decide to use the system based on whether they know they will arrive on time.

“Until the public is convinced that they can get to where they’re going on time and not have delays, our ridership is not going to rebound,” Evans said.

“But once we cross that threshold and reliability is almost certain, the ridership on Metrorail, and I believe Metrobus as well, will increase.”

He knows that faith in on time performance may not be fully restored soon.

“We’re still doing a lot of things that are going to slow down the rides on our system, and I can only ask people to be patient with us,” he said. “But, boy, I get it.”

But rail riders will face single-tracking or shutdowns for years to come as Metro makes upgrades and repairs.

“To invest the average $1.5 billion a year will involve some pain on the system as a whole, and to the extent that that impacts ridership, those are not fully fleshed out yet,” Anosike said. “We are trying to be a lot more careful, a lot more thoughtful, as we think of where we expect ridership to be.”

With most of the track work focused on nights and weekends, Metro Budget Director Tom Webster said ridership has declined for short trips and in off-hours, leading to a higher average fare paid per trip since long-distance riders pay more.

The fare increases last summer were much smaller for rush-hour riders than off-peak or bus riders.

“Bus collisions, bus customer injuries are up, bus employee injuries are up, and, I guess logically, bus ridership is down because maybe the type of service that they’re experiencing,” said Metro Board Member Bob Lauby.

He asked for more focus on the needs of bus riders in the coming year.

As of Friday, Metro will have put 75 of 105 buses back into service that were pulled for safety issues in September when two of the 2014 NABI 8000 Series buses stalled while in service within a week.

One bus crashed on Interstate 395.

Chief Operating Officer Joe Leader said those 75 buses have been repaired and are now up to date on preventive maintenance.

The transit agency continues to have issues with coolant sensors on newer compressed natural gas buses.

To address broader issues, Metro is in the midst of a longer-term analysis of how to overhaul bus routes.

Leader said more buses were on time in the last six months of 2017 than the same period a year earlier in part because schedules were adjusted to more realistically reflect rush hour traffic delays.

Evans, the Metro Board chairman and D.C. councilmember, suggested bus-only lanes on the road may be the true solution.

“Not today, not tomorrow, maybe not next month, but there comes a time when you reach a critical mass that forces the issue to happen,” Evans said.

There was a significant fight over adding just a few blocks of a dedicated bus lane near Howard University, but Evans hopes bus lanes in the D.C. area like those in many major cities around the world could become reality at some point to help improve commutes, given that D.C. continues to grow and is nearing 700,000 residents.

“I don’t know it’ll be in my lifetime, but maybe it will,” Evans said.

Other ways to raise revenue

Metro does not plan to raise fares or cut service in the year starting July 1, but the Metro Board is still considering adding additional service to the proposal.

Several additional bus routes and additional rush-hour Red Line service to Shady Grove using trains that currently end at Grosvenor-Strathmore are among the ideas expected to be added to the budget proposal over the next few weeks.

As Metro struggles with funding, Maryland Metro Board Member Michael Goldman suggested Thursday that the board revisit proposals later this year to sell naming rights to stations to the highest bidder.

Goldman also suggested charging Uber and Lyft for picking up or dropping off riders in Metro kiss and ride areas, similar to the charges imposed at the region’s airports, and expanding the already growing digital advertising in the Metro system. 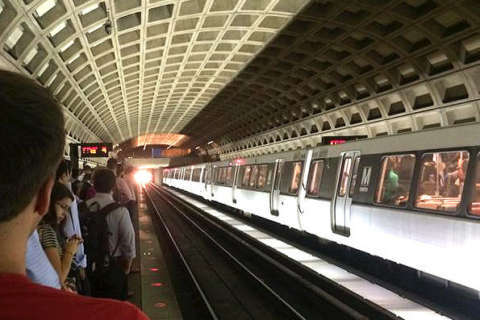