Are Metro fare hikes, service cuts key to turnaround or to ‘death spiral’?

Either Metro is in a downward spiral of declining ridership and shrinking revenue, or the region’s transit agency is about to make a dramatic turnaround and begin providing more reliable service, board members suggested.

Metro’s Finance Committee advanced a budget plan Thursday that includes across-the-board fare hikes, rush-hour rail service cuts and some reductions in bus service. The full board is expected to vote on the budget later this month.

Malcolm Augustine, who represents Prince George’s County and was the only dissenting vote as the Finance Committee approved the budget plan, said many of those cuts could have been avoided.

He argued that Metro could find some fat to trim from the transit agency’s separate capital budget — from projects not related to safety or reliability — and use that money to reduce the pain for riders.

“We could do that and put this agency going forward instead of on this downward spiral,” Augustine said.

His comments echo transit advocates and Metro’s largest union, who worry that raising fares while also cutting service will only accelerate declining ridership and further reduce Metro’s income from fares.

Northern Virginia Chamber of Commerce CEO Jim Corcoran, Virginia’s appointee to the Metro Board, said that even with an expected short-term decline in riders, he disagreed that it would keep people away in the long term.

“I will not continue to pay the same amount for bad service and for a lack of reliability … I think this is a very good business decision to improve the product that we are going to offer. Because an improved product will bring back riders,” Corcoran said.

Riders and jurisdictions will each pay more under the budget plan for the first time in several years.

Augustine said that Metro’s projections for how many riders would stick with the system might be overly optimistic, given that only two-thirds of rail riders approve of Metro and that the planned bus fare increase was considered the least-acceptable option by riders in Metro’s own budget surveys.

Metro General Manager Paul Wiedefeld hopes that Metro can draw riders back, despite the higher fares.

Wiedefeld has warned that the transit agency faces a more difficult budget process next year without dedicated, regional funding. Still, he said the agency is not in crisis.

“Not at all. I mean, you have the commitment of the region, both the local jurisdictions and the business community, to basically get this system to where we all want it to be. So that’s the reality of where we are with the system. Do we have challenges? You bet. But far, far from a crisis,” Wiedefeld said.

Metro has not adjusted its internal rail schedules for years, despite a number of changes that add time to a train’s trip, including required pauses before train operators open doors.

With fewer trains scheduled under the budget plan, Wiedefeld said riders will be within expected travel times more often.

“The probability of hitting that schedule’s going to be much better,” Wiedefeld said. 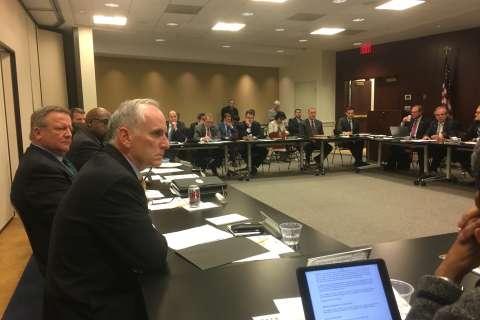 Metro GM: DC could have a more reliable rail system in the fall