WASHINGTON — What’s expected to be Metro’s most disruptive “SafeTrack” work will be well underway next week when riders learn whether fare hikes could be coming.

Metro’s proposed budget for fiscal year 2018 is expected to be released next week on Thursday.

“Fare increases: We haven’t had one in three years; the policy of the board is that would [happen] every two years,” Metro General Manager Paul Wiedefeld said Wednesday.

Wiedefeld talked about fares during a “Metro Progress Report”presented to the Metropolitan Washington Council of Governments board of directors.

When asked whether there’s a risk higher fares could push riders off the system, Wiedefeld said rising prices tend to be accepted as part of life in the transportation industry.

“People do accept them, just like you accept changes in the price of milk — or whatever,” Wiedefeld observed.

After the briefing, COG’s board chair was skeptical.

“This is not the way to move forward,” said Roger Berliner, who is also vice president of the Montgomery County council.

“We literally are at the top of every subway system in the country in terms of fare box recovery,” Berliner said. “Particularly when you are struggling with your service — to have fare increases, it seems to me, strikes a very discordant note.”

COG analysts are creating a list of suggestions for localities on how best to create a dedicated source of funding for Metro. That report is expected sometime before March 2017. Berliner expects an aggressive campaign could be underway by next fall to support one or more of the funding options. 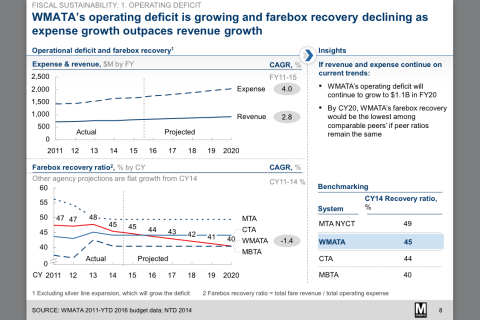