WASHINGTON — What can riders expect from Metro after several months of round-the-clock track work and additional safety problems highlighted by a series of federal investigations?

Metro General Manager Paul Wiedefeld has cited actions taken to improve the personnel and management side of the transit system, saying, “We are not dodging any of these issues. We’re going to go after them, and — unfortunately — it does mean, as we’ve seen, it’s going to have an impact on customers at times.”

He cited unscheduled track work that led to single-tracking on the Orange Line on Monday afternoon last week. In the past, he said, they might have gone with a more temporary fix instead, putting a permanent fix on hold. But that mindset has shifted.

At a special Metro Board meeting Thursday, Wiedefeld said his focus on getting safety front and center at Metro is workers’ “individual responsibility.”

“[There is] just conflicting information: We’re asking questions, and we should be getting, you know, similar answers, and we’re not,” Wiedefeld said. “The procedures and the standards are there. They haven’t been followed, and in some cases, they haven’t been followed for decades … why weren’t they being followed? Well, that’s one of the reasons we’re doing the investigation.”

Metro is also bringing in outside contractors to do their own inspections to establish a baseline for repairs and maintenance.

Three separate Federal Transit Administration reports found track inspectors and maintenance crews who did not or could not do their jobs, repeated problems with trains or equipment running red signals, and a “widespread lack of compliance” with policies for handbrakes, which can allow trains or equipment to roll off unattended.

“That seems to be throughout the system — there are standards that are just not followed,” said Jim Corcoran, Metro Board member and Northern Virginia Chamber of Commerce CEO.

Robert Lauby, chief safety officer at the Federal Railroad Administration and Metro Board member, said he had similar concerns. He feared that if track inspection procedures had not been rigorously followed, there could be an issue with inspections in other areas of the system.

Metro officials and the system’s expanding quality assurance group will have to look at every part of the bus and rail system to find answers.

“This is an organizational problem that we need to address,” said Pat Lavin, Metro chief safety officer.

Metro leaders have promised to change the “safety culture” before, but Wiedefeld hopes the emphasis on discipline and anti-nepotism, retaliation and harassment policies will help make more of a change this time.

“Either we follow the standards, or you just do not work here,” Wiedefeld said.

David Strickland, Metro Board member and former National Highway Traffic Safety administrator, said Metro needs a more specific plan to fight against an “embedded culture” and “a lack of faith in the system.”

“I know individual accountability’s important, [but] there’s only so many hammers and so many nails to go around,” Strickland said. “At the end of the day, there’s going to have to be a crosscurrent of responsibility built into, frankly, every employee at WMATA, and it’s just not there.”

As members of Metro’s largest union looked on, other Metro Board members raised concerns about supervisors and whether each individual worker understood their role in the system’s safety. Wiedefeld said employees should understand that they were “equal participants” in Metro’s safety overhaul and that they will also be held accountable.

“Again, it’s not a union issue, it is an agency-wide issue that we’re addressing,” Wiedefeld said. “It’s not just the track walkers — this is track walkers, supervisors, that entire part of it … everyone has to understand that they are all part of the solution.”

Joseph Leader, who took on the role of Metro chief operating officer about a month ago, added that oversight could be better.

Malcolm Augustine, a Metro Board member from Prince George’s County, linked the current problems to a derailment near the Smithsonian Metro station last summer. That derailment had been tied to track problems that were ignored.

As Wiedefeld, Lavin and Leader sat at the front of the room, Lauby alluded to the fact that Metro riders have heard big promises before.

“I congratulate the three of you, you know, right now, the fresh eyes, you’re part of the solution, and maybe in four or five years, you might be part of the problem again — I don’t know,” Lauby said. The room filled with nervous laughter.

“You’re doing the right things, and I want to congratulate you,” Lauby finished. 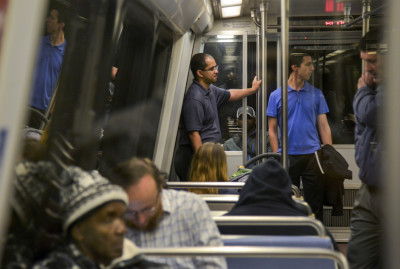