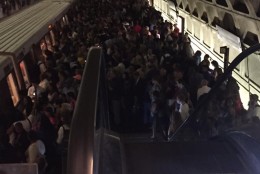 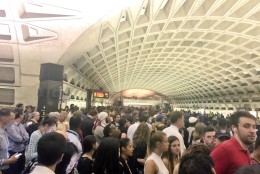 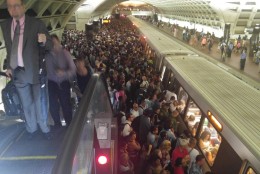 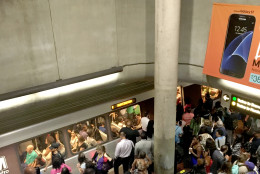 WASHINGTON —Debris on the tracks added an extra layer of delays along Metro’s Green and Yellow Lines on Thursday, causing crowded platforms and leaving many riders airing out frustrations on social media during evening rush hour.

“There were so many people that I just pretty much stood in one spot for 10 minutes or so, just not even moving,” said Lindey Haake of D.C., who got stuck in the crowd while trying to exit L’Enfant Plaza station.

The Metrorail system was already experiencing delays due to a system wide SafeTrack initiative, planned waves of disruptions and shutdowns needed to improve safety. But debris found on the tracks near Gallery Place slowed things down even more.

Inbound and outbound trains were forced to share a single track between 5 and 5:30 p.m. Meanwhile, the number of commuters gathered on the already crowded platform increased, leaving many riders looking to social media to vent.

“It wasn’t even safe,” said Haake, who was tweeting during the ordeal. “If something had happened, like a fire, we wouldn’t have had anywhere to go.”

Haake said people on trains were unable to exit and those trying to get onto trains couldn’t enter because no one could move.

The operator on the train told riders about delays due to a track problem, but riders didn’t get any other assistance or information once they got off the train.

“Just getting there [to L’Enfant Plaza Station] and not seeing any Metro workers helping direct people was kind of strange,” Haake said.

“It should come as no surprise that L’Enfant was more crowded than usual. It is handling many customers who normally use the Blue Line during Surge 2,” Dye said in an email to WTOP.

Dye said in an email to WTOP that Metro Transit Police officers were at both Gallery Place and L’Enfant Plaza stations dealing with not only the crowds but a fight-in-progress call.

As for the duration of the single tracking period, Dye said after the debris was removed from the tracks near Gallery Place, the track had to be inspected and a test train sent through the area, before normal service could resume.

Silver Line, 6 Metro stations back up and running Aug. 16 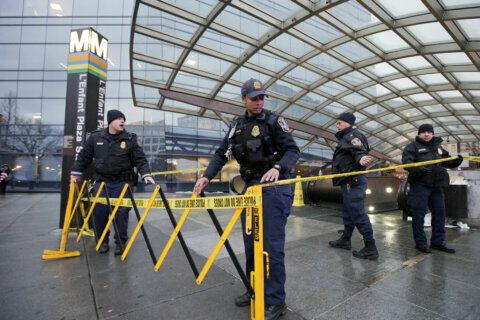