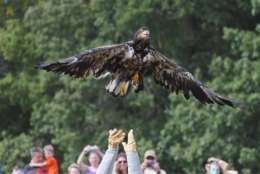 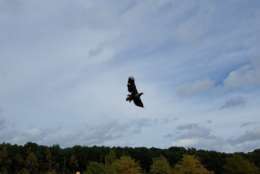 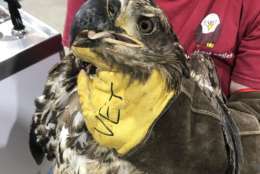 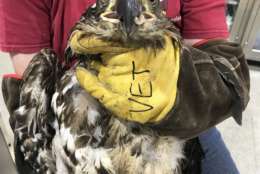 WASHINGTON — A bald eagle that was rescued by Stafford County Animal Control earlier this year has made a full recovery and has taken flight.

Anthony McCall responded to a call about an injured bald eagle at the Rappahonnock Regional Landfill on Eskimo Hill Road on May 16, according to a news release from Stafford County’s Sheriff’s Office. He found a very weak eagle on the side of a ravine. At the Wildlife Center of Virginia, veterinarians discovered that the bird had multiple wounds and lead poisoning.

“That bird was pretty quiet when he first came into us. It was also really thin and had a decreased heart rate,” said Amanda Nicholson, director of outreach at the Wildlife Center of Virginia. “It was not in good condition whatsoever.”

It took about five months for the bald eagle to make a full recovery; it was released at Caledon State Park in King George County on Oct. 9 according to Amanda Nicholson, the director of outreach at the Wildlife Center of Virginia.

“Every once in a while you get a good call where you are saving someone or something — it is a beautiful thing,” McCall said. “It is especially amazing to save an eagle. You don’t get that close to one very often.”

This is the 12th bald eagle McCall has rescued in his 10-year career with Stafford County.