ST. PAUL, Minn. (AP) — The Minnesota Wild and the St. Louis Blues were two of the best teams in the NHL down the stretch of the regular season, with these long-running rivals locked in a relentless heavyweight fight for second place in the Central Division.

After nudging ahead of the Blues by winning their last two games, the Wild earned the extra home game in the first round.

But facing the Blues right away? Well, that’s hardly a reward.

“We’re going to play a very good hockey team — experienced, skilled — and they’re playing one, too,” Wild general manager Bill Guerin said. “It’s got the makings of a great series.”

The Wild established a slew of franchise records, including points (113), wins (53) and goals (305), and finished behind only Colorado in the Western Conference.

“They’ve kind of got a good dynamic from all angles — scorers, big guys that can score as well, good defensemen that are active,” Blues defenseman Colton Parayko said. “They’ve got a lot of good pieces, so they’re going to be a challenge.”

“In the past, the Blues were kind of known as a heavy, physical team, and now they have a ton of skill too,” Wild center Tyson Jost said. “You saw how we played them down the stretch here, and it’s been some great games back and forth. It’s going to be a great series.”

The Wild will host Game 1 on Monday and Game 2 on Wednesday. If the series goes the distance, they’ll have Game 7 on May 14 at Xcel Energy Center, where they went 31-8-2 this season.

The last time the Wild had home-ice advantage in a playoff series was, fittingly, against the Blues in the first round in 2017 when they lost in six games.

Since the NHL in 2014 enacted the current postseason format with divisional brackets instead of seeding by conference finish, few first-round matchups have been as stacked as this one.

Only two other opening series pitting the second and third place teams from the same division in that span featured a stronger combined record. The average points percentage between the Blues and Wild was .677, behind the Tampa Bay-Toronto matchup (.686) this year in the Atlantic Division. The highest was last season, with Minnesota-Vegas at a whopping .701. Points percentages were naturally higher last year with the truncated 56-game schedule.

Over the final six weeks of the regular season, the Wild led the league with a plus-30 goal differential, according to Sportradar data. The Blues were tied with Calgary and Edmonton for second best in that span at plus-24.

Wild left wing Marcus Foligno — one of the team’s alternate captains who has formed an imposing and productive second line with Joel Eriksson Ek and Jordan Greenway — took a knee-on-knee hit in the final regular season game against Colorado.

Foligno was back at practice on Sunday, though, so the Wild appeared to avoid a scare. Right wing Mats Zuccarello was there, too, after being sidelined pver the last week by a minor injury.

For the Blues, center Brayden Schenn and defenseman Marco Scandella were on the ice with the team on Sunday and on track for Game 1 after recent injury absences.

Guerin traded for Jost, left wing Nicolas Deslauriers and defenseman Jacob Middleton right before the deadline to add some brawn to the lineup, but there was no more meaningful acquisition than goalie Marc-Andre Fleury. The reigning Vezina Trophy winner and three-time Stanley Cup champion has formed a formidable tandem with All-Star Cam Talbot, raising the good-problem-to-have question about who will get the most time in the series.

“You can’t make a bad decision,” Guerin said. “We have two guys that we have all the faith in the world in.”

The Wild were fifth in the league, after Kirill Kaprizov set the franchise record with 47 goals and Ryan Hartman (34), Kevin Fiala (33), Eriksson Ek (26) and Foligno (23) also established career highs. Zuccarello had 24 goals — and 55 assists.

“Both teams can score their way out of problems,” Blues general manager Doug Armstrong said. 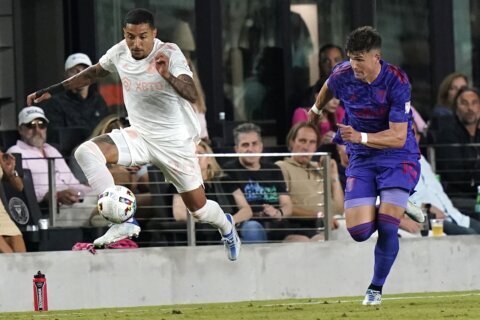