Real Madrid aims to build its Liga lead over the defending champion when it hosts Atlético Madrid in the capital derby. Diego Simeone’s Atlético is already 10 points back in fourth place and can ill afford another setback against its fiercest rival. Carlo Ancelotti’s Real Madrid is on a nine-game winning streak across all competitions. Karim Benzema and Luis Suárez have made their respective squads after recent injuries. Third-placed Real Betis hosts a fifth-placed Real Sociedad that needs a victory to stop its slump. Barcelona visits Osasuna without injured striker Memphis Depay and wanting to rebound from its exit from the Champions League group phase. Rayo Vallecano, the league’s surprise sensation, faces a test at a Villarreal hoping to improve in the domestic competition after making the Champions League last 16.

West Ham tries to maintain its grip on fourth place in the Premier League when it visits relegation struggler Burnley. Leicester needs to shake off its poor form in order to revive its challenge for a European place at home against struggling Newcastle. Leicester went out of the Europa League on Thursday and has won only one of its last six league games. Everton tries to build on its win over Arsenal — which ended an eight-game winless run — when it visits Crystal Palace.

Defending champion Inter Milan and Napoli both have chances to move to the top of Serie A after league leader AC Milan was held to a draw. Inter is two points behind its city rival and hosts relegation-threatened Cagliari. Napoli is a point further back and welcomes Empoli. Napoli has faltered in the league of late and won only one of its past five Serie A matches. Atalanta is only five points behind Milan and visits Hellas Verona. Lazio has a tricky trip to Sassuolo, while Bologna travels to Torino.

Record-setting Greuther Fürth hosts Union Berlin in the Bundesliga. Unfortunately for Fürth, its records are not desirable. Winless after 14 games, its solitary point is a negative record at this stage, as is its 12-game losing streak, while no other team conceded first in each of its opening 14 games, either. Union, on the other hand, is flying high after a fine start to its third season in the Bundesliga. Eintracht Frankfurt hosts Bayer Leverkusen to close out the 15th round. Goals are expected. None of the teams’ previous 72 meetings ended scoreless.

Monaco has good reasons to worry ahead of its trip to runaway leader Paris Sain-Germain. Kylian Mbappe, who helped Monaco win the 2017 Ligue 1, has been in great form recently, scoring twice midweek in the Champions League. Mbappe says “it’s extra special” to be up against the team where he came to prominence. But there is “no time to be sentimental,” he insists. Lionel Messi has also stuck another rich vein of form. He also scored twice against Club Brugge in the Champions League and will be looking to improve his meager league tally: The former Barcelona player has only one league goal so far. PSG has an 11-point lead over Rennes in the standings, with third-placed Marseille lagging two points further back. Rennes faces Nice while Marseille travels to Strasbourg. 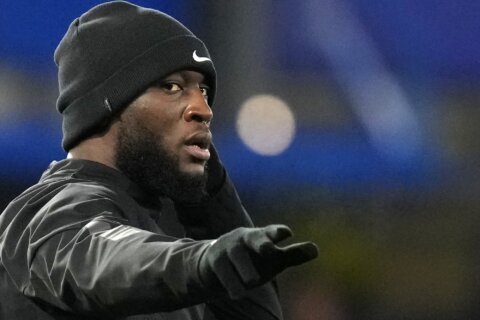