ST. PETERSBURG, Russia (AP) — Margarita Gasparyan and Daria Kasatkina both won in the round of 16 on Thursday as…
Listen now to WTOP News WTOP.com | Alexa | Google Home | WTOP App | 103.5 FM

ST. PETERSBURG, Russia (AP) — Margarita Gasparyan and Daria Kasatkina both won in the round of 16 on Thursday as a record seven Russian players made the quarterfinals of the St. Petersburg Ladies Trophy.

The eighth-seeded Kasatkina beat Aliaksandra Sasnovich of Belarus 5-7, 6-3, 7-6 (2) and Gasparyan ousted Katerina Siniakova of the Czech Republic 6-4, 6-4 to give Russia a clean sweep of all four matches played Thursday.

Three other Russians advanced on Wednesday, giving the country seven players in the quarterfinals of a tournament for the first time. The WTA Tour said the last time seven players from one country reached the last eight of a tour-level event was in 1993, when seven Americans were in the Oakland quarterfinals.

The other two matches on Thursday were all-Russian affairs. 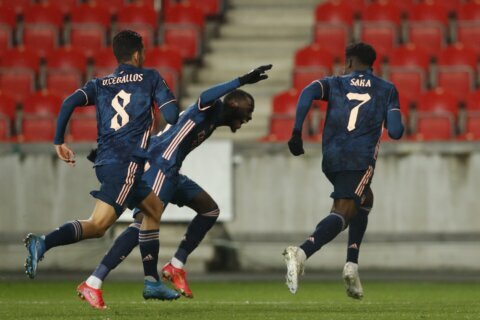