Legal sports betting is coming to D.C., but you won't be able to place a bet on the citywide app just anywhere. There are unique challenges created by the District's topography and the nature of the specific law that has been passed.
Listen now to WTOP News WTOP.com | Alexa | Google Home | WTOP App | 103.5 FM

As you probably know, legal sports betting is coming to the District sometime later this year. While the entire enterprise remains something of a wild west, with new frontiers being discovered and capitalized every day, there are numerous, unprecedented challenges presenting themselves that states and municipalities are tackling on the fly. The next of these for D.C. is the challenge of navigating the byzantine carve outs to create a system that juggles the many particular stipulations required to make legal sports betting a reality.

First, there’s the obvious: Sports betting is not yet legal in either Maryland or Virginia, and even if it was, it wouldn’t be regulated the same way it is in D.C. For the D.C. Lottery, which will be the sole proprietor of the mobile app upon which people can make sports wagers generally in the District, that means setting up geofencing along the city’s border to ensure they are in compliance with both state and federal law. But simple IP targeting is far too inaccurate for such a task, only measuring down to the range of several miles.

That’s where companies like GeoComply come in, using technology that can identify location down to a range of roughly 10 feet. Developed primarily for the mobile gaming industry, it’s what daily fantasy sports companies like DraftKings use to ensure potential users are located in states where DFS is legal. Due to the way the District’s law is written, though, the situation is more complex here than in other states.

“D.C. does present a very unique geolocation challenge,” John Pappas, public affairs officer for GeoComply, told WTOP. “Within the District itself, there are going to be so many different exclusion zones.”

In addition to the city/state lines, there are zones within D.C. where sports betting will still be prohibited. Federal buildings fall outside of local jurisdiction, as does national park land. There are 19 — yes, 19 — areas designated as national parks within Washington’s district limits, including the Lincoln Memorial, the National Mall, Rock Creek Park, and the White House. There are an additional 55 federal buildings listed on the GSA website, most in and around Downtown. As for which zones are off limits, Public Affairs Officer of the D.C. Office of the CFO David Umansky says the federal enclave will include the fairly comprehensive area covered in the Shipstead-Luce Act, a space in which the Lottery is already prohibited from operating.

Another stipulation in the bill provides for exceptions for the independently operated sportsbooks and connected apps at every major professional sports arena in D.C.: Audi Field, Capital One Arena, the Entertainment & Sports Arena, and Nationals Park. The properties would also have a two-block exclusion radius, but according to Umansky, their footprint wouldn’t actually extend into that radius around the facility itself. That means that if you were within that zone, you would be in a “dead zone” in which you couldn’t bet using the proprietary app of the arena, nor the citywide app.

But even within these guidelines, there are details to be worked out. Audi Field and Nationals Park are just two blocks from each other, meaning their zones overlap by a full two blocks, right up to each others’ main gates. How will that be resolved?

According to Umansky, “the Lottery is working this out.” Meanwhile, our local sports teams whose venues will likely be hosting their own sportsbooks and online apps are staying mum for now, until the dust clears.

For consumers, this mobile sports betting in the District will require downloading the citywide app as well as each individual app for the various arenas. Audi Field, Capital One Arena and Nationals Park are all eligible to create their own, which may each exist on different software (the Entertainment & Sports Arena is city-owned, and no decision has been made or is expected soon on its eligibility, per Umansky).

“What would be great for that is if there’s a single platform that services both stadiums,” said Pappas. “Then, an individual would be able to use their app within that entire area there, or at either of the stadiums.”

Businesses holding Class B licenses are also authorized to set up their own mobile networks to operate within their establishment only, like the arenas. Practically, this means potentially another app to download, if your favorite watering hole goes that direction.

Those who use Virtual Private Networks (VPNs) or other location blocking software when connecting online would be instructed by the operator to turn them off in order to be able to place a wager and would block them from doing so until they complied. Under the current setup in New Jersey, those attempting to place a bet outside the state zone are not only blocked from doing so, but their names are added to a database.

Users will still be able to see betting lines and check on wagers they have already placed, and collect while in exclusion zones both inside and outside the District, but will not be able to put any new money down. Getting all those lines right is crucial for a number of reasons, beyond simply the legal ones.

The final regulations should come down sometime next month, potentially setting the stage for the infrastructure to be in place in time for the NFL season. 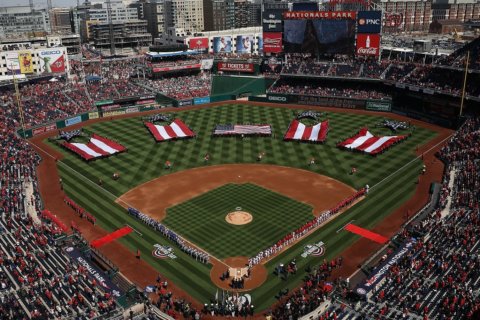