WASHINGTON — In a season chock-full of bad offenses, the Baltimore Ravens have perhaps the NFL’s worst.

There were three shutouts on Sunday, which matched the total number of such games all of last season. Surprisingly, Baltimore has pitched one of this season’s five shutouts but hasn’t put a big doughnut on the scoreboard themselves.

It’s been pretty close, though; the Ravens have lost four of their last five games, scoring only three offensive touchdowns in those defeats. If you think Baltimore’s offense is hideous to the naked eye, just wait till you get a load of the numbers.

Only the Miami Dolphins average fewer than the Ravens’ 277.6 yards per game and Baltimore’s paltry 18.6 points per game would be even worse were it not for their special teams unit that’s scored two touchdowns and boasts a kicker automatic from inside 50 yards (Justin Tucker made all three of his attempts in Sunday’s loss to the Vikings and is 13-of-15 this season).

No matter what Joe Flacco says, his offense is broken and his own regression is the chief culprit. His 1,189 passing yards rank 28th in the NFL, and his 5.3 yards per pass and 70.0 passer rating are the worst among QBs to start every game for his team. Regardless of whether you think he deserves all the blame, Flacco presides over the league’s worst passing attack (more like passive attack) that averages a scant 157.4 yards per game and has only a 35 percent third down conversion rate (which ranks 26th in the NFL).

That’s right, the Ravens’ pass offense is worse than the Chicago Bears, who just had their rookie passer throw only seven passes Sunday. Way worse than winless teams in San Francisco and Cleveland, where they’ve had to turn to unheralded rookie QBs.

This is just a stark reminder that Flacco has always been overrated. For years, I’ve seen debate over whether he’s elite as a joke. He put together an amazing playoff run to lead Baltimore to an improbable Super Bowl victory in 2013. That got him a huge payday and he’s done precious little since: Only once has his passer rating been above 85. His TD/INT ratio is currently upside down for the second time. He’s posted a winning record only one year (2014).

Flacco’s 83.8 career passer rating not only makes me yawn, but makes me wonder how it’s not more commonly recognized. To put this in perspective, Flacco’s career rating is only slightly higher than Josh McCown’s 79.4 and way below the “inconsistent” Kirk Cousins’ 94.8 career rating. The Ravens turned their noses up at Colin Kaepernick, yet his 88.9 rating beats Flacco’s and even at Kaepernick’s worst season, he was a 78.5 and never threw more picks than touchdowns. If Flacco’s woes continue, he’ll finish under that low bar twice.

To be fair, injuries have hurt Baltimore this year every bit as much as Flacco has. Mike Wallace suffered a concussion in the loss to Minnesota, which left Baltimore with only three healthy receivers — one of whom was just signed last week. Marshall Yanda, their best offensive lineman, went down with a season-ending ankle injury in Week 2 and an otherwise mediocre line has left Flacco running for his life (he was sacked a season-high five times Sunday to run the total to 17 this season). The 13th-ranked run game has been good, but not nearly consistent enough to offset the miserable comedy of errors when the Ravens dare to pass.

The Ravens’ defense isn’t providing much support either. The D looked dominant against the lowly Bengals and Browns to start the season but the unit looks beatable against teams outside Ohio, especially against the run. Baltimore is dead last at stopping the run, giving up 145.3 yards per game. Were it not for their 7th-ranked pass defense, the Ravens defense would be way worse than 18th in yardage and 13th in scoring.

As bad as Baltimore has looked, they still have this hope: Their schedule isn’t hard. The Ravens’ two toughest remaining games are a prime-time affair against Houston Nov. 27 and at Pittsburgh Dec. 10. Rookie Deshaun Watson will probably run wild in the former, and the latter is a contentious — and historically unpredictable — rivalry game that will probably clinch the Steelers the AFC North title with a victory. Otherwise, they get bad offenses/teams like Miami, Cleveland, Indianapolis and Cincinnati.

As ugly as Baltimore’s brand of football will be in 2017, they’ll likely stay around .500 and be relatively competitive — which probably hurts them in the long run since they won’t be in position to draft Flacco’s replacement or get one of the elite level skill position prospects like Saquon Barkley in the 2018 NFL Draft. So cover your eyes Ravens fans — the M&T in the stadium name stands for Misshapen and Twisted for awhile to come.

But take a peek at the updated NFL Week 7 Recap. 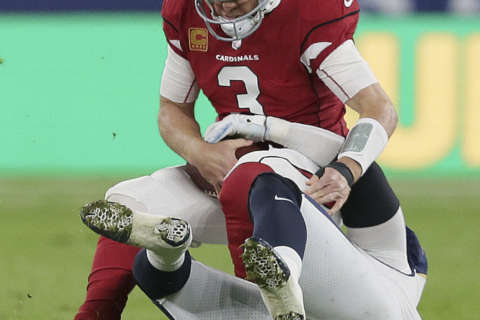