The university team's prototype will compete next week against 23 others from around the world.
Listen now to WTOP News WTOP.com | Alexa | Google Home | WTOP App | 103.5 FM

COLLEGE PARK, Md. — Someday, the time it takes to get from D.C. to New York could be cut to 29 minutes.

And a group of University of Maryland students would like to help make that vision a reality. For months, they’ve been working on it at the College Park campus.

“This is Nemesis” said Mike Rennie, patting what looks like a rectangular metal box on wheels. 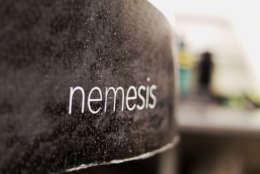 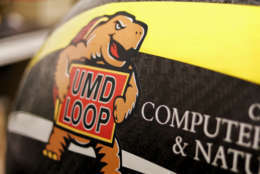 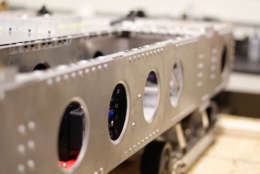 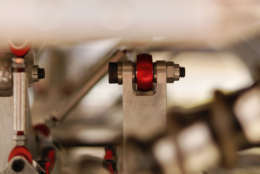 The aluminum-and carbon-fiber pod is on its way west to take part in the SpaceX Hyperloop pod competition in Hawthorne, California.

Rennie, a junior, is on the university team that will compete against 23 others from around the world. Pods will be tested on the SpaceX track to see which is the fastest.

Gesturing toward Nemesis, Rennie said it has “a design that everybody sees every day — they just don’t realize it.

“This is exactly how a plane’s wing is designed.”

Another member of Team UMDLoop, Shelly Szanto, said they’ve got some stiff competition.

“Universities from all over the world are building their own prototypes, so they’re completely different from each other. No design is alike.”

Among the 24 competing are teams from Switzerland, India and Poland.

As envisioned by SpaceX CEO Elon Musk, the Hyperloop would be “the fifth mode of transportation,” Szanto said — somewhere between a fast train and a plane.

“It’s basically a pressurized train in a vacuum tube, so there’s no air resistance, and that’s what makes it go so fast,” she explained.

Nemesis should break 100 mph at the competition, Rennie said.

“We are hoping to see speeds around 100 miles per hour,” he said, adding that “it’s really dependent upon SpaceX and the accelerator that they provide to us.”

The team will be in California this week testing their prototype pod on the SpaceX track. During the testing period, Szanto said, the teams will get a chance to see how their designs behave in real life.

The real competition begins Friday. What does winning mean to the team? That’s easy, Szanto said.

“You say you won the first-ever Hyperloop competition,” she said, “and this is definitely feasible technology that you’re going to tell your grandkids about.”

You can track the team’s progress at @UMDLoop. 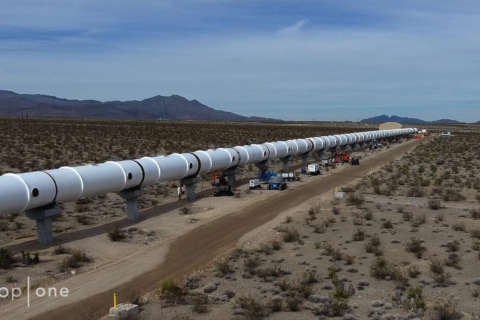