Inside and outside Ukraine, a nation steeped in Jewish history and heritage, people are preparing to celebrate Passover, which begins sundown on April 15. It’s been a challenge, to say the least.
Listen now to WTOP News WTOP.com | Alexa | Google Home | WTOP App | 103.5 FM
(1/9) 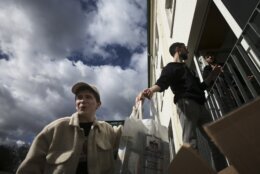 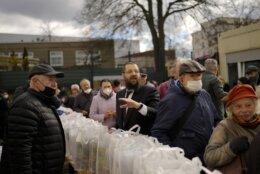 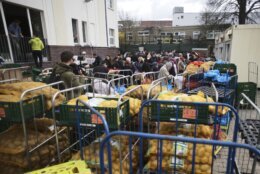 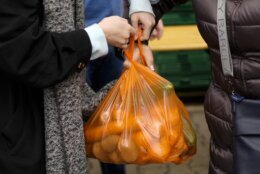 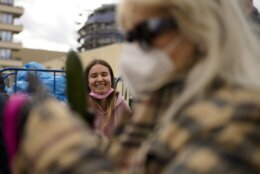 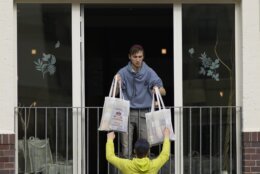 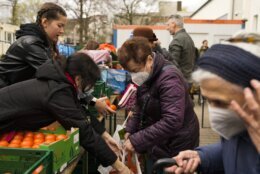 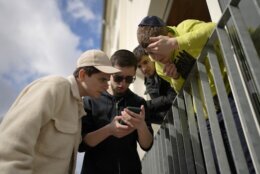 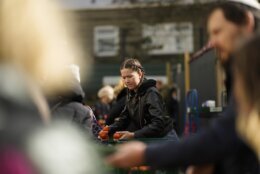 “Good morning! Happy morning!” Rabbi Avraham Wolff exclaimed, with a big smile, as he walked into the Chabad synagogue in Odesa on a recent morning.

Russian missiles had just struck an oil refinery in the Ukrainian city, turning the sky charcoal gray. Hundreds were lining up outside his synagogue hoping to receive a kilo of matzah each for their Passover dinner tables. The unleavened flatbread, imperative at the ritual meal known as a Seder, is now hard to find in war-torn Ukraine amid the war and a crippling food shortage.

But the rabbi wanted no challenge to get him down — be it the lack of matzah or that he was missing his wife and children who had fled the Black Sea port for Berlin days ago.

“I need to smile for my community,” Wolff said. “We need humor. We need hope.”

Tens of thousands of Ukrainian Jews have fled while about 80% remain in Ukraine, according to estimates from Chabad, one of the largest Hasidic Jewish organizations in the world. Inside and outside Ukraine, a nation steeped in Jewish history and heritage, people are preparing to celebrate Passover, which begins sundown on April 15. It’s been a challenge, to say the least.

The holiday marks the liberation of Jewish people from slavery in ancient Egypt, and their exodus under the leadership of Moses. The story is taking on special meaning for thousands of Jewish Ukrainian refugees who are living a dramatic story in real time.

Chabad, which has deep roots and a wide network in Ukraine, and other groups such as the American Jewish Joint Distribution Committee (JDC) and the Jewish Federations of North America, have mobilized to help Ukrainian Jews celebrate Passover wherever they have sought refuge. In Ukraine, Chabad plans 52 public Seders welcoming about 9,000 people.

In Odesa, Wolff is preparing to host two large Seders – one in early evening at the Chabad synagogue for families with young children and a later Seder at a hotel where participants can stay the night, obeying a 9 p.m. curfew.

He’s been waving in trucks loaded with Passover supplies – matzah from Israel, milk from France, meat from Britain.

“We may not all be together, but it’s going to be an unforgettable Passover,” Wolff said. “This year, we celebrate as one big Jewish family around the world.”

JDC, which has evacuated more than 11,600 Jews from Ukraine, has shipped more than 2 tons of matzah, over 400 bottles of grape juice and over 700 pounds of kosher Passover food for refugees in Poland, Moldova, Hungary and Romania, said Chen Tzuk, the organization’s director of operations in Europe, Asia and Africa. In Ukraine, their social service centers and corps of volunteers are distributing nearly 16 tons of matzah to elderly Jews and families in need, she said.

“Passover is something familiar and basic for Jewish people,” Tzuk said. “For refugees who have left everything behind, it’s important to be able celebrate this holiday with honor and dignity.”

JDC is organizing in-person Seders in countries bordering Ukraine and elsewhere in Europe, she said, and is facilitating online Seders where it’s too dangerous to gather in person.

The Jewish Federations of North America has set up a volunteer hub in support of refugees fleeing Ukraine; it’s a partnership with the Jewish Agency for Israel, the JDC and IsraAID. Russian-speaking volunteers, such as Alina Spaulding, will help organize a Seder for 100 refugees at a hotel in Budapest.

Spaulding, a resident of Greensboro, North Carolina, fled Kharkiv, Ukraine, as a 5-year-old in the 1970s with her parents. She said the war has rekindled strong connections to Ukraine.

“My mom showed me a photo of me with my grandpa on a street that was recently bombed,” Spaulding said. “We talked about the university in Kharkiv where my mom and dad went, which was also hit. Suddenly, it all felt so personal.”

Spaulding believes spending Passover with refugees will be “an experience to remember.”

“Part of the magic of Passover is finding your own story,” she said. “We’re in the middle of a modern-day exodus. I can’t even imagine the stories I will hear.”

Celebrating a holiday can give people a rush of hope and happiness even in grim situations, said Rabbi Jacob Biderman, who leads Chabad activities throughout Austria, including a center in Vienna that is sheltering about 800 Ukrainian Jews. Days after refugees reached his center, Biderman led a joyous celebration of Purim, a festival commemorating the deliverance of Jews from a planned massacre in ancient Persia.

“The look on their faces changed from sorrow to joy… Their eyes lit up,” Biderman said. “It gave them a sense of normalcy, dignity and the belief that their spiritual life is something no one can take away from them.”

That fueled Biderman’s determination to provide a memorable Passover Seder for the refugees.

Dr. Yaacov Gaissinovitch, his wife, Elizabeth, and their three children – ages 11, 8 and 4 – will be part of that celebration. They fled the Ukrainian city of Dnipro by car on Friday, March 4. Gaissinovitch, a urologist and mohel who performs the Jewish rite of circumcision, said it pained him, as an observant Jew, to drive on Shabbat – a forbidden act on the day of rest and prayer except when lives are at stake.

“I drove nonstop for 12 hours to Moldova to save us all,” he said. “We sang all the Shabbat songs in the car. It was very, very hard.”

In Dnipro, Gaissinovitch had his offices in the sprawling Menorah Center, which serves as a center of Jewish life, housing a synagogue, shops, restaurants, museums and the office of the city’s chief rabbi.

After a month of being severed from everything familiar, the Chabad center in Vienna has been a blessing, Gaissinovitch said.

“We’ve been accepted here very warmly,” he said. “After being disconnected for days, the children have been able to see that our life hasn’t stopped.”

A similar community at the Chabad center in Berlin is housing about 1,000 refugees, including Rabbi Avraham Wolff’s wife and children from Odesa. The center plans to host eight Seders citywide and has distributed matzah and other food to community members. Refugees, including 120 children from an Odesa orphanage who arrived in Berlin along with Wolff’s family, distributed the items to locals, said Yehuda Teichtal, the chief rabbi of Berlin.

“To me, this is extremely touching,” he said. “That people on the receiving end are able to give and not be viewed as victims. It’s empowering and energizing.”

As they prepare for Passover, Teichtal, Biderman and Wolff said they have been inspired by Rabbi Menachem Mendel Schneerson, known as the Lubavitcher Rebbe, who was among the most influential global leaders in Judaism in modern times. April 5 marked the Rebbe’s 120th birth anniversary, a special number in Jewish tradition.

“The Rebbe built a strong foundation (in Ukraine) so we’re able to do what we’re doing now,” Wolff said.

Schneerson grew up in Ukraine during a challenging time in the former Soviet Union, Teichtal said.

“In spite of all the darkness, his focus was selflessness, dedication, love for all humanity and the unwavering faith that we are going to overcome,” Teichtal said.

In Ukraine, surviving when your home is blasted