Holidays: Where to see holiday lights | Santa's back with inflation, inclusion on his mind | 4 ways to limit your holiday debt | Inflation 'definitely a guest' at holiday celebrations this year
Home » Prince William County, VA News » A first for Prince…

Using signatures PWEA submitted back in the spring to show interest, the union is moving for a January election in the hopes of becoming the exclusive bargaining representative for the school system’s state-licensed employees, which includes over 7,000 teachers, nurses, counselors, athletic trainers, technology coaches, psychologists, social workers, speech pathologists and department chairs.

“For the first time in history, Prince William County Schools educators secured a collective bargaining resolution. This is an historic achievement for all educators in Prince William County. Although we must continue to work to strengthen the process, educators acknowledge and celebrate this achievement,” the PWEA said in a statement. “The Prince William Education Association leadership publicly announces we are providing PWCS with our 45-day notice for a Union election beginning on January 3, 2023.”

Per the bargaining resolution, an agreed-upon third party will hold secret ballot union elections across several days and at multiple locations. Voting by mail or in-person is allowed under the resolution, but in order for the election results to count, at least half of the bargaining unit’s overall employee base must participate in the election, a provision PWEA members slammed at the Oct. 19 School Board meeting.

Maggie Hansford, president of the education association, called the election process “unfair” last week and said that School Board members themselves didn’t need half of their electorate to show up in order for their elections to be valid. She put out a call for new school board candidates for next year’s elections.

In a message retweeted by the PWEA, SEIU Virginia 512 President David Broder called the resolution “union-busting” and showing “contempt for teachers.”

But School Board members said the provision was meant to ensure that a representative sample of employees actually wanted to be represented by the union. Otherwise, Occoquan School Board Member Lillie Jessie said, an election in which a few hundred people vote could end up impacting thousands of employees.

“When you talk about having a seat at the table, I think you need to think about having other teachers have seats at your table … I’m not sure why you’re worried about it,” Jessie said last week. “I cannot support having a few people make decisions for everyone.”

Potomac District Board Member Justin Wilk, one of the strongest supporters of bargaining efforts over the last year, told InsideNoVa that he’d be open to “working on” the 50% threshold mandate in the future and that every school should be allowed as a voting site for elections.

But he also said that Hansford told the School Board that PWEA had the backing of over 5,000 employees when the union was submitting signatures to show interest in the spring.

“Here’s the thing, PWEA has, allegedly, 5,000 … [supporters] to move forward with collective bargaining in their cards. To me, it’s a no-brainer, they should be able to easily cross the 50% threshold,” Wilk said.

According to PWEA attorney Broderick Dunn, the PWEA’s move for elections would only cover the licensed bargaining unit. The resolution passed last week also created a separate bargaining unit for other employees like food service workers, maintenance staff, bus drivers and others, but a union would need to show interest from that group to ultimately hold union elections for the right to represent them.

Hansford did not respond to multiple requests for comment about whether the PWEA has any plans to represent non-licensed employees, some of whom pay PWEA dues.

“If that’s who PWEA wants to start with, as long as all their dues-paying members are represented,” Wilk said. “Maybe this is just a start.”

The School Board’s vote to enshrine the right to collective bargaining for school system employees culminated a years-long effort among school employees and labor leaders from around the state and county for true union representation and collectively-bargained school employee contracts.

In 2020, the Democratic-controlled Virginia General Assembly lifted a prohibition on public sector collective bargaining in the commonwealth that had been in place since the 1970s, though it gave local governing bodies and school boards sole discretion over whether to allow collective bargaining among their employees.

Months after the General Assembly law took effect last year, PWEA members began collecting signatures. By the spring of 2022, the union submitted cards from more than 30% of the school system’s state-certified non-administrative employees calling for a yes or no vote on bargaining from the School Board.

Demands of the job

County teachers have said that bargaining on increased pay and a better work environment will be necessary to keep the school system competitive on recruitment and retention, particularly as growing teacher shortages continue to impact public schools around the region and beyond. Prince William County Schools teachers received a 7% average raise in the fiscal year 2023 budget, but their pay remains among the lowest in the region.

At the same time, many teachers say the burden of post-pandemic learning loss, increasing standardized testing mandates and professional development time requirements that they have little say over have made the job less attractive.

“The past couple of years have been difficult for everyone …. Our educators that have stayed the course have proved their loyalty, dedication and commitment to not only their profession, but most importantly, the students,” PWEA building representative Amy McCarthy said at last week’s School Board meeting. “Do you trust and value your employees? Really trust and value us enough that we can be a part of the negotiations?”

With the Oct. 19 vote, Prince William County Schools employees join public school workers in Arlington and Richmond in obtaining the right to directly negotiate contracts with their school boards. Prince William’s county government is still in negotiations over a bargaining resolution for county employees. 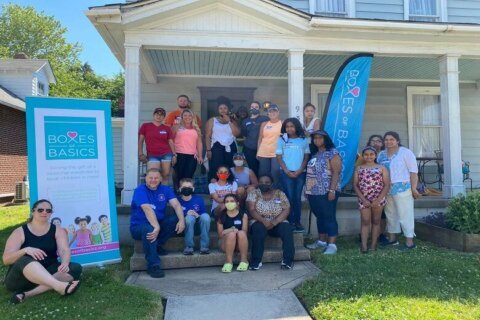 How a Prince William Co. woman’s nonprofit is helping kids she never meets