Two Prince William County police officers were justified when they shot and injured a man who had fired on them in what authorities called an ambush, a review conducted by county prosecutors has found. One of the officers was struck in the back, police revealed for the first time Thursday, but his bulletproof vest absorbed the shot.
(1/3) 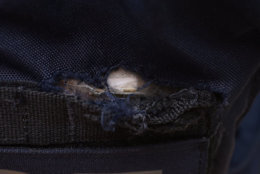 WASHINGTON — Two Prince William County police officers were justified when they shot and injured a man who had fired on them in what authorities described as an ambush, according to a review conducted by county prosecutors.

The two young officers — identified as 25-year-old Evan Jurgenson and 22-year-old John Yenchak — responded to a Woodbridge, Virginia, house on the evening of Nov. 4 when police say 29-year-old Brett Anthony Monteith began opening fire on the officers from the roof of the house.

One of the officers was struck in the back, police revealed for the first time Thursday, but the officer’s bulletproof vest absorbed the shot and he was not injured.

During the melee, both officers fired back at Monteith, who was struck in the upper body and taken to the hospital with serious injuries. He has since been released and has been charged with one count of attempted capital murder of a law enforcement officer and one count of using a firearm in the commission of a felony.

Monteith is due in court for a preliminary hearing Dec. 12.

“The evidence indicates that the responding officers used great restraint and used deadly force only when necessary, in my opinion,” Prince William County Commonwealth’s Attorney Paul Ebert said in a statement Thursday. His office reviewed the investigation into the shooting, which was conducted by detectives with the department’s Criminal Investigations Division.

“I am confident that our officers performed with the upmost courage as they faced a dangerous, unprovoked attack by an armed assailant,” he said. “Their actions that evening were heroic and we are fortunate that none of the officers in the incident or any innocent residents in the area were harmed.”

The two officers were called to the Woodbridge house at about 5:45 p.m. after Monteith’s grandfather called 911 to report that his grandson was bleeding and holding a gun. It was later discovered that Monteith had shot himself before his grandfather called 911, police said. By the time officers arrived at the house, Monteith had climbed up on to the roof of the house. When officers arrived at the house, they faced “immediate gunfire,” authorities said. 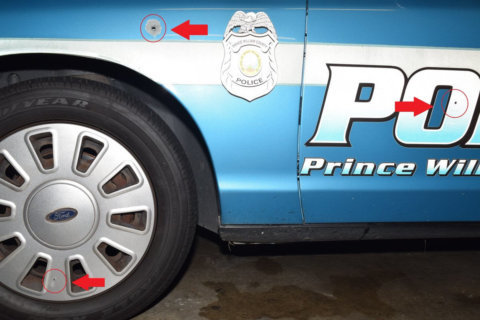