Corey Stewart, a Republican who is running for Virginia governor, said criminal illegal aliens pose a public safety threat, and he believes that under the administrations of President Barack Obama and President George W. Bush, many were not deported as the county expected.
(1/2) 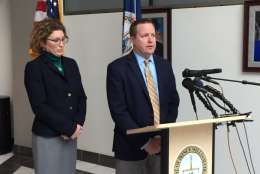 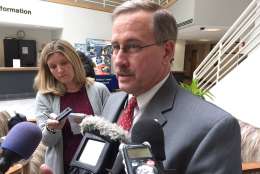 WOODBRIDGE, Va. — A fight is brewing in Prince William County over the definition of “criminal illegal alien.”

It began with a Tuesday afternoon announcement by Board of Supervisors Chairman Corey Stewart, a Republican who is running for Virginia governor.

“On behalf of the Board of County Supervisors of Prince William County, I’m requesting the Trump administration to identify, detain and remove the 7,500 criminal illegal aliens that we have handed over to [Immigration and Customs Enforcement] over the past 10 years,” he said.

Stewart said those people pose a public safety threat, and he believes that under the administrations of President Barack Obama and President George W. Bush, many were not deported as the
county expected.

He said some returned to the county and were accused of committing new crimes.

“We have re-apprehended 14 percent of the individuals that we had handed over to ICE, and who we thought had been deported,” Stewart said.

But the chairman said he defines a criminal illegal alien as someone proven to be in our country illegally but simply arrested and jailed for a crime, not necessarily convicted.

“I don’t know what the percentage of conviction is, but it’s probably pretty high,” he said.

Stewart said the request is part of the county’s federal legislative agenda, which the board passed unanimously several weeks ago.

But after the news conference, Supervisor Frank Principi, a Democrat, said Stewart was twisting the board’s words.

Principi said the agenda the board approved assumed the conventional definition of criminal illegal alien.

“He is redefining criminal illegal alien, and my guess is that my colleagues on the Board of Supervisors will not accept this at all. I still think we have to have due process.”

“We’re going to fight this tooth and nail, and we’re going to make sure that we keep him in his place,” he said.