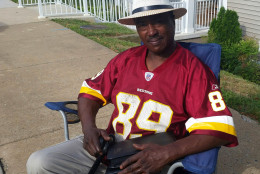 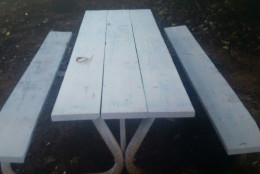 WOODBRIDGE, Va. — A Prince William County veteran and retired corrections officer faces a misdemeanor charge for painting a picnic table at an apartment complex where he was living.

Mickey Triplett faces a $2,500 fine or up to a year in jail if he is convicted of the destruction of property charge. He’ll be in court Monday morning for his trial.

“At first I was scared,” says the 53 year-old, who couldn’t believe he’d been charged for painting a picnic table white. The table belonged to the Potomac Ridge Apartments in Woodbridge where he was living earlier this summer.

WTOP also reached out several times to the company that manages the apartment complex, Klingbeil Capital Management Ltd., for comment but never heard back.

Triplett says his granddaughter was coming to visit from Emporia, Virginia, near the North Carolina border to celebrate the Fourth of July. He says that’s when he decided to make the weathered table more presentable by painting it white.

“I’m so sorry that I did that,” he says. He admits that he did it without asking permission. And he says it’s caused an enormous amount of heartache.

During his arraignment on July 14, the judge asked him if he wanted legal representation.

“Yes, I was scared, and I’ve been thinking about it,” he says of the possibility he could be found guilty.

But he’s found hope in the numerous phone calls, well-wishes and plenty of prayers he’s received.

A local law firm has agreed to take his case pro-bono. And he’s heard from other veterans including Del. Rich Anderson, R-Prince William, who is retired from the Air Force and called him to voice support.

Triplett, a former Marine who served from 1980 to 1988, worked as a D.C. corrections officer for 22 years. He says his intentions were good.

“Sometimes we do things, we mean good but sometimes it could be bad,” he says.

Volunteers of America made it possible for him to move immediately out of Potomac Ridge and into another apartment community nearby. He says he had been trying to move even before he painted the table.

Despite the good intentions, he lost his ID during the move.

And when he tried to withdraw money from his bank account, the bank declined to turn over the cash because he couldn’t produce any identification.

He says at that point, “I literally dropped on the ground and started crying. At that point, I was just completely overwhelmed. “

But Triplett says he has faith that God will pull him through this.

“I don’t have any doubt about the outcome. He’s already showed me the outcome by the responses of former vets, lawyers and a state delegate,” says Triplett.