“I hope it’s over,” said Angelica Flores, whose family owns Disco Centro and two other stores in the strip. “I’m really hoping there’s no more storms, because all of this cleanup … it’s a lot.”

A convenience store they own next door still has dried mud on the floors, but for now the focus is more on going through inventory that was near ground level, and checking the cabinets and shelves for damage. All the water has left some of the wood shelves peeling apart.

“Everything that was near ground level has to be picked up, and I have to take stuff out from the back and clear it up on higher ground,” Flores said. “A lot of water got in, and it was a lot of cleanup to do especially since we were recovering from Monday’s storm. And the second storm was worse than the first.”

Those whom WTOP spoke with said it all happened fast.

“It flooded the whole store,” said the manager of a cellphone store a few doors down. He was pushing puddles of water out of the store’s front door with a broom, though at least by then the water wasn’t up past his ankles any more.

He said he wasn’t going to be open today, “meaning a loss for the store, literally.”

He said the town of Riverdale needs to work on fixing drainage problems. He said after Monday’s storm someone from the town visited to talk about the situation, “and the only thing they put outside were cones,” said the manager.

“Cones are not really going to work,” he added. 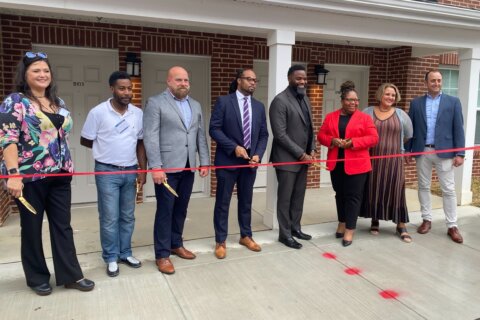