The Cal Ripken Sr. Foundation has helped open up over 100 new baseball fields across the nation. But the 107th, which just opened in Palmer Park, is unique. Find out why.
Listen now to WTOP News WTOP.com | Alexa | Google Home | WTOP App | 103.5 FM
(1/5) 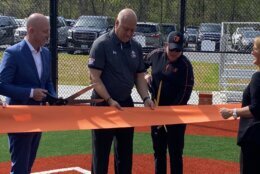 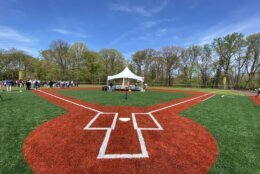 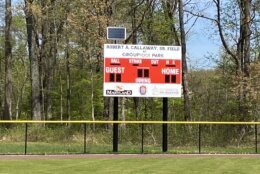 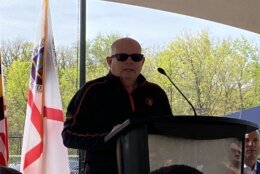 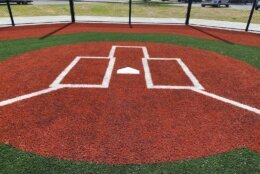 The Cal Ripken Sr. Foundation has helped open up over 100 new baseball fields all around the country.

But the 107th, which just opened in Palmer Park, is unique. Not because of the synthetic turf infield, something the county actually doesn’t have a lot of, but its location on police property right next to the old Prince George’s County police department headquarters.

“What was once a dream,” said police Chief Malik Aziz, is now “a reality and we know that this will positively impact our youth.”

The field will be used by teams that play in the Prince George’s County Police Athletic League.

“As the first baseball field located on police property in the entire country,” said Aziz, “being on this property is a milestone. And for the Prince George’s County Police Department, for Prince George’s County, for the residents who are here and for the youth who are here, I know all too well what a park like this represents to young people because it’s parks, not quite as good as this one, that affected my life and kept me out of trouble.”

The Iron Man himself said that’s a common refrain he even hears from the game’s greatest players.

“In the Hal of Fame speeches when you go to Cooperstown,” Ripken said, the new inductees “all think about who was instrumental in helping them get on the right path. And usually it’s a coach at the youth league level that they identify.

“Then they start talking about all the values and all the lessons they learn, individual responsibility, how to work with a team, then those guys at the Hall of Fame have the talent to take it someplace else,” said Ripken. “Those same lessons happen to all kids that play sports and it’s a good basis to lay down for anything you want to do in life.”

The building of this field was able to happen in part to a sizeable donation from Dan Towriss, the president and CEO of Group 1001 and a member of the Cal Ripken Senior Foundation.

“There’s nothing about these parks that are looking for the next pro athlete,” said Towriss. “It’s really the life lessons learned through coaches, the relationships they’re able to build with athletes, and the rapport they have.”

Maryland Gov. Larry Hogan, who grew up in nearby Landover Hills, also testified to the impact youth sports had on him growing up.

“The camaraderie, the fellowship, team spirit, learning about discipline,” said Hogan. “I think the idea of working together with the police department right here on the ground is going to make a difference in kids lives. It really will.”

He added, “It’s just a beautiful collaboration from a lot of people that worked really hard to make this happen and I think it couldn’t turn out any better.”

“They truly are transforming lives and providing opportunities to kids who need them most,” said Hogan about the CRSF. “Together we’re providing safe and inclusive positive environments for young people to play, to learn, and to grow.”