Hazmat crews were called out to Landover, Maryland, to deal with gas leaking from a 200-gallon tank in the back of a passenger van Saturday.
Listen now to WTOP News WTOP.com | Alexa | Google Home | WTOP App | 103.5 FM
(1/2) 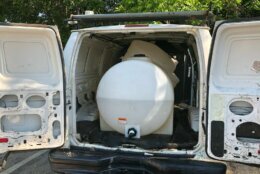 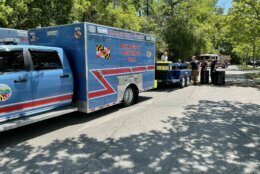 Hazmat crews were called out to Landover, Maryland, to deal with gas leaking from a 200-gallon tank in the back of a passenger van Saturday, and police are warning residents against further panic-buying.

Police told WTOP the container the gas was being stored in was not designed to hold fuel, which may have contributed to the leak.

The operator of the van was not present when the van was found, and no injuries were reported.

Members of the fire department remained on scene to contain the spill.

Police reminded residents that panic-buying was a bad idea, and that it lead to poor decision making and could endanger the public.

After reports broke of the hack on the Colonial Pipeline — which supplies around 45% of the southeastern United States’ gas and oil — reports of people panic-buying gasoline skyrocketed.