Teachers in Prince George's County Public Schools are raising concerns about returning to classrooms during the coronavirus pandemic. They turned out for a protest in Springdale.
Listen now to WTOP News WTOP.com | Alexa | Google Home | WTOP App | 103.5 FM
(1/5) 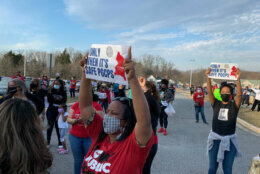 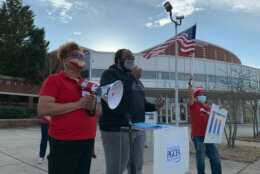 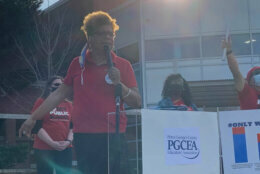 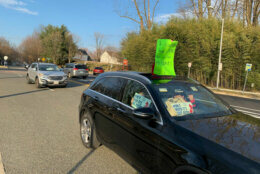 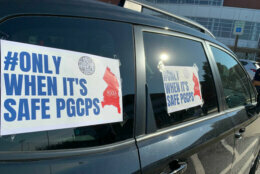 A cacophony of car horns filled the air around Charles Herbert Flowers High School in Springdale Thursday as part of a protest against Prince George’s County’s plan to return students and teachers to the classroom in the Maryland county amid the COVID-19 pandemic.

Many of the people behind the wheels of those cars were teachers in the school system, which is Maryland’s second largest with an enrollment that tops 131,600 students.

“It’s a shame that educators are afraid to go back into the buildings,” said Theresa Mitchell Dudley, president of the Prince George’s County Educators’ Association. That remark was followed by the crowd chanting “shame, shame, shame.”

Dudley said the union and its teachers do not feel community spread levels are low enough or that enough has been done at schools in order to ensure a safe return.

Teachers are expected to report to schools March 17 to prepare for returning students. The first wave of students will begin hybrid learning April 8, the second on April 15.

This afternoon teachers with the Prince George’s County Educators’ Association took part in a car caravan to protest the hybrid learning plan beginning in April. Teachers set to return next week. @WTOP pic.twitter.com/jXOUxQCh98

Dudley said teachers shouldn’t be required to come back “when the ventilation is not right, when you don’t have 6 feet where you can socially distance, when the schools are not disinfected as they should be, windows don’t open.”

When reached by WTOP for comment, the school system provided a video message Prince George’s County Public Schools CEO Monica Goldson sent to teachers in the school system that is among the 20 largest in the nation.

“I understand your anxiety around returning. I too had it when I had to come back to work,” Goldson said in the video.

The schools CEO said there would be personal protective equipment for teachers, who would also have opportunities to wash their hands throughout the school day. She said buildings will have space for social distancing and vaccines have been offered for teachers who want them.

Goldson also said 27% of staffers have continued to work throughout the pandemic.

“Some changes are good but we are a long way from being comfortable,” said Jacqueline Gaskins, a teacher at Charles Flowers who spoke at a rally before the car procession.

The union has delivered a list of demands to the school system. Among them are more investments into making sure classrooms have adequate air ventilation systems. The union wants more testing, COVID-19 case tracing and vaccination opportunities to be made available.

The union would like more money spent on improving distance learning and more time for teachers to transition from virtual to hybrid learning.

Some students in attendance also called for a continued delay of any form of in-person learning.

“I don’t believe that it’s safe for us to come back, which is why I will not be coming back,” said Shemar Cooke, a senior at Parkdale High School.

“Our voices need to be heard, our kids need to go into an environment where it’s safe,” said Yvette Reyes, a parent at Mary Harris ‘Mother’ Jones Elementary School.

PGCPS also shared with WTOP a report from the Center on Reinventing Public Education that looked into the reopening of schools. The report found that returning to class does not increase the risk for children to contract COVID-19 or lead to transmission rates higher than those seen in the community. The report claims the impact of loss of learning, particularly for children of color, “will lead to lower educational attainment and lower future earnings.”

Not all families are against the return to class, according to Goldson. About 42,000 students have elected to take part in hybrid learning.

In the parking lot of Charles Flowers after the protest, Ebere Opaigbeogu, a parent of two students, told WTOP while she feels for the concerned teachers, she is excited that her children will be able to return to the classroom.

“I really think it’s time for us to get up and going and life needs to move on,” she said.