Fire, explosion in Beltsville warehouse when gas tank was left among recycling materials

A gas tank that exploded when it entered the shredder was among construction material being recycled in a warehouse in Beltsville, Maryland, that caught fire and startled nearby residents and workers.
Listen now to WTOP News WTOP.com | Alexa | Google Home | WTOP App | 103.5 FM
(1/2) 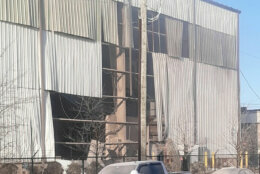 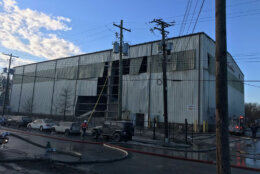 A gas tank that exploded when it entered the shredder was among several construction material being recycled in a warehouse in Beltsville, Maryland, that caught fire and startled nearby residents and workers.

It happened just before 8 a.m. Friday in an industrial area on Somerset Avenue off Old Baltimore Pike.

Firefighters were called for a reported explosion and found a one-story warehouse with smoke showing on the front of the building.

“It sounded like a bomb had gone off and inside of our building everything was knocked off … phones were off the hook, pictures were off the walls,” said Tina Funkhouser of N&S Towing, which is across the street from waste management and recycling company Sun Services.

“All you could see was smoke everywhere,” Funkhouser told WTOP.

“While on scene, there was another explosion which preliminarily appears to have come from a recycling unit” inside the building, Prince George’s County Fire/EMS tweeted.

The tank exploded upon entering the shredder. Frost said the preliminary cause of the fire was accidental.

The warehouse was evacuated, and the fire was put out by 9 a.m. There were no injuries or transports, Frost said.

Surveillance video of this morning’s (Feb.5) building explosion on Somerset Ave. in Beltsville and a synopsis from the scene with #PGFD Battalion Chief Frost. No workers or firefighters were injured. Fire investigators determine cause was accidental. Mutual aid @mcfrs @mcfrsPIO pic.twitter.com/3bFVKx0Fhv

The WTOP Traffic Center reported Old Baltimore Pike between Somerset Avenue and Edmonston Road, which was closed due to the fire department activity, had reopened to vehicle traffic at 10:38 a.m.