After an investigation into allegations of criminal misconduct, the chief of police for Seat Pleasant, Maryland, has been cleared and has received a vote of confidence from the city’s mayor.
Listen now to WTOP News WTOP.com | Alexa | Google Home | WTOP App | 103.5 FM

Maryland’s state prosecutor has found no evidence of criminal misconduct after allegations that Seat Pleasant police Chief Devan Martin had someone else take a polygraph for him during a recertification test.

Seat Pleasant Mayor Eugene Grant said the “false allegations” against Martin were borne from a previous “corrupt” police department, and that several disgruntled former employees are no longer members of the department.

“It was abundantly clear there was no wrongdoing on the part of the leadership or the chief of police,” Grant said.

Grant, in a packed news conference that had the tenor of a church service, said Martin was targeted because he has been committed to reform in the police department, which Martin said has approximately 26 full-time officers.

“You will be criticized for doing right,” Grant said, with audience members responding in the affirmative. “Jesus said beware when all men speak well of you — if everybody is speaking well of you, there’s something you ain’t doing right.”

Martin thanked the mayor and Seat Pleasant residents for their support, and said his faith had kept him strong during the investigation by Maryland’s Office of the State Prosecutor.

”We had the obligation to trust in the process,” Martin said. “We cooperated 110% with the state prosecutor.”

Martin was asked why he believed a former employee had lodged the allegations against him.

“Departments are faced with bad apples and people that should not be here,” Martin said. “I’ll be honest with you, some of these people should have never worn a gun and a badge.”

Martin and Grant did not specify who had accused the chief of wrongdoing, but Martin said lax hiring and vetting procedures had hurt the Seat Pleasant department.

“Some of these people have been to multiple departments — four, five, six departments in our county,” Martin said. In addition to the large Prince George’s County Police Department, several cities within the county have small departments.

”We have accountabilities now, we have command structure, we have policies now in place, we have hiring standards that are on the top end of state standards,” he said.

Despite the intense stress and allegations that questioned his leadership, Martin said he is focusing on improving life for people in Seat Pleasant. “In leadership, we know that you’re going to go through public scrutiny — we have to do that. We have to be able to be tried and tested,” he said. 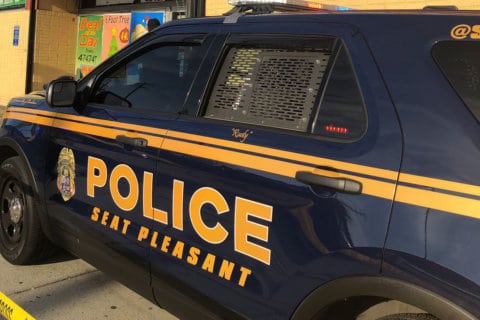