Midway through the school year, some area school systems continue to recruit school bus drivers. In Prince George’s County, a shortage of drivers keeps the school system’s top administrator up at night.

“Transportation is not where I would like for it to be,” said Prince George’s County school CEO Dr. Monica Goldson.

Goldson said the county is constantly searching for drivers.

“We are having job fairs every two weeks,” she said.

“We’re in major competition with our Metro system in D.C.,” she explained.

So if pay isn’t the problem, what is? Goldson said it comes down to scheduling. Applicants with commercial driver’s licenses are highly sought after by transit systems and by delivery companies.

“If they would prefer to work at night, they have the ability to do that” in transit systems or commercial work, said Goldson. School bus drivers, on the other hand, typically work split shifts.

Under Goldson’s leadership, Prince George’s County schools has formed a transportation task force that meets monthly. The task force members are being asked to come up with a plan that would consolidate routes to deal with the driver shortage.

Goldson said she expects a report from the task force by spring break, and that she hopes she’ll have a solution for the 2020-21 school year. 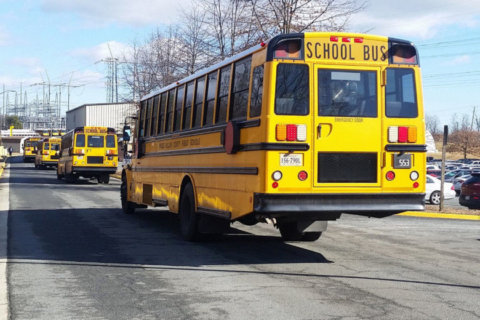