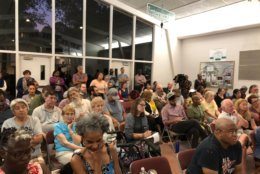 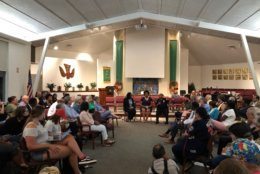 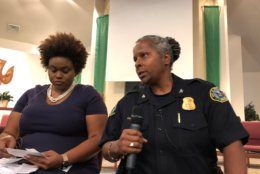 University Christian Church in Prince George’s County, Maryland, provided the space and it was a full house Tuesday night, as the community came to learn more about a fatal police-involved shooting.

On Sept. 26, 49-year-old Leonard Shand, charged at police with a knife in each hand behind The Mall at Prince George’s on East-West Highway in Hyattsville. Ten police officers fired their weapons, killing him. Six of those officers were with Hyattsville police.

Residents wondered why so many officers fired at Shand and why they did not shoot to wound him instead of killing him. One resident even wondered why police couldn’t use a rope lariat to lasso the man.

“Ten cops are shooting one person. They’re shooting like it’s Bonnie and Clyde out there,” said Patricia Welch, of Hyattsville.

“It seems like there was no consideration, it was just start shooting. I want to find out if that was the case. Was people’s safety even thought about?” said Cindy Harding, of College Park.

Awad told residents that she has reviewed police bodycam and in-car camera video of the 28-minute standoff.

She told the community that officers were well aware that the man was in an emotional crisis as he threatened officers and held them at bay.

“The intent is to get Mr. Shand to a medical care facility for an emergency evaluation. The officers clearly see there’s an issue,” Awad said.

Prince George’s County police are conducting both a homicide investigation and an internal review of police procedures in the death of Shand.

“I ask that each of us exercise patience because it is a process, and I’m hopeful that it’s a process that we will be able to work through together,” Awad told the community.