Rondell Henry, 28, is accused of planning to drive a stolen U-Haul truck into a crowd of people. Authorities have said he was inspired by the Islamic State and planned to kill “disbelievers.”
Listen now to WTOP News WTOP.com | Alexa | Google Home | WTOP App | 103.5 FM

A Germantown, Maryland, man was ordered held without bond Tuesday after law enforcement officials detailed accusations that he planned to drive a truck into a large crowd of people at National Harbor.

Rondell Henry, 28, is accused of planning to drive a stolen U-Haul truck into a crowd of people. Authorities have said he was inspired by the Islamic State and planned to kill “disbelievers.”

Henry was ordered detained without bond at a hearing Tuesday. He’s a naturalized U.S. citizen who moved from Trinidad and Tobago 11 years ago and is a graduate of the University of Maryland University College. He’s been charged with transporting a stolen vehicle across state lines.

In court, federal public defender Michael CitaraManis argued the government “is trying to fit certain facts into their narrative.” He asked for his client to be freed on house arrest, but U.S. Magistrate Judge Thomas DiGirolamo ordered Henry held without bond while he awaits trial. The judge agreed with prosecutors that the defendant poses a danger to the public.

A court filing by prosecutors Monday says Henry watched Islamic State propaganda videos of foreign terrorists beheading civilians and fighting overseas, admiring their actions and considering them brave. Henry told investigators he believed in an “eye for an eye” and thought inflicting pain and bloodshed was the best way to achieve a “balance,” Assistant U.S. Attorney Thomas Windom told the magistrate.

Robert Hur, the U.S. attorney for Maryland, said at a news conference Tuesday that Henry “appears to have formed a plot to harm large numbers of innocent people, and taken concrete steps to execute that plot.”

Henry first appeared on law enforcement’s radar as a missing person, as reported to the Montgomery County police March 26. He was arrested March 28 and charged with driving a stolen vehicle across state lines. Jennifer Moore, the acting special agent in charge for the Baltimore Field Office of the FBI, said the case of Henry “rapidly changed from a missing person” to something much different.

Moore said the case was evidence that “our greatest threat right now is homegrown violent extremists — those individuals who radicalize independently and alone in their own home, with little to no warning.”

She said that such attacks can be best prevented by people in the community who keep an eye out, calling them “our strongest link to preventing these type of attacks.”

She added, “As you’ve always heard: If you see something, please say something, and I promise we will do something. Because we are only stronger together.”

Based on his own experience, he said, Henry’s views “do not represent the Muslim community within Prince George’s County.”

Stawinski praised detectives who “went beyond what was apparent, asked deeper questions” and used the resources that allowed them to connect the dots.

“We have collaboratively prevented pointless violence,” he said.

Henry isn’t charged with any terrorism-related offenses. The stolen-vehicle charge, which carries up to 10 years in prison, is likely a placeholder count, with prosecutors expected to present evidence before a grand jury and secure an indictment that could have new charges.

CitaraManis said in court that his client is a college-educated computer engineer who has a tight-knit family, including a mother and sister who live in Maryland and a brother who lives in Florida. Family members filed a missing persons report after Henry walked away from his job during the middle of his shift March 26.

After his arrest by local law enforcement, Henry was taken for a psychiatric evaluation. He was held at a mental health facility for several days before FBI agents took him into custody, his attorney said.

Windom told the judge Henry also notified his landlord in Germantown, Maryland, that he was breaking the lease on his apartment. Henry intended to die in an attack and had recently spent time with relatives because he thought he wouldn’t see them again, according to the prosecutor.

Henry stole a U-Haul van from the parking garage of a mall in Virginia and initially considered an attack at Dulles International Airport on March 27, trying unsuccessfully over two hours to breach the security perimeter by slipping in through a checkpoint or accessing a restricted area, prosecutors said.

Instead, he drove to National Harbor later that morning but also found a similarly small crowd, so he parked the truck, broke into a boat and hid there overnight, according to prosecutors. Police arrested him the next morning after they found the stolen van and saw Henry jump over a security fence from the boat deck.

Questioned by investigators, Henry allegedly said he planned to carry out a truck attack similar to one that killed dozens of people in Nice, France, in July 2016.

Prosecutors say investigators recovered a phone that Henry discarded on a highway in an apparent attempt to conceal evidence, including images of the Islamic State flag, armed Islamic State fighters and the man who carried out the massacre in an Orlando, Florida, nightclub three years ago. 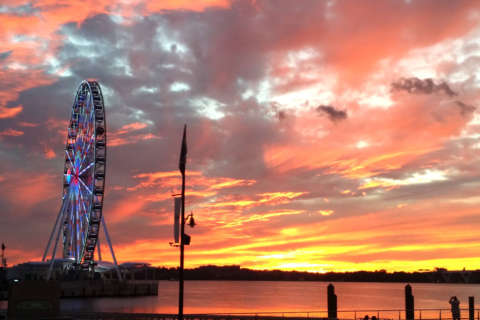