When a college student from Maryland spent a semester in South Africa, she expected to teach English and share with her students American culture through an African-American lens. Instead, Breana Ross' journey left her with a mindset shift, and an award from her study abroad program.
Listen now to WTOP News WTOP.com | Alexa | Google Home | WTOP App | 103.5 FM

When a college student from Clinton, Maryland, spent a semester in South Africa, she expected to teach English and share American culture with her students through an African-American lens.

Instead, Breana Ross’ journey left her with a mindset shift, and an award from her study abroad program.

Ross, who is wrapping up her final semester at University of Miami, has been awarded the Institute for the International Education of Students’ annual Global Citizen Award.

The Institute for the International Education of Students (IES) is a nonprofit that has been around for more than 65 years under a few different names. However, their Global Citizen of the Year award is on the new side — in its third year.

The winner and finalists were among those who submitted applications for award consideration. Ross has won a $1,000 cash prize, and three other finalists each won $400 in cash.

“An international jury of IES Abroad employees reviewed the student applications, looking for contributions the students made that affected their local community while abroad; lessons they learned not only about themselves, but also about the local community in which they lived; and plans to sustain or continue their impact once they have returned from abroad,” a news release announcing the awards said. 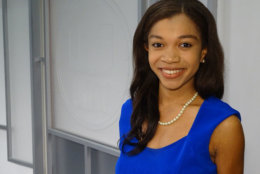 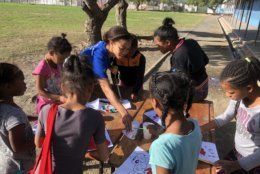 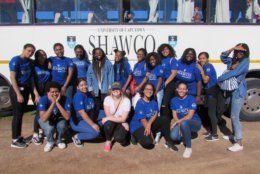 Living to serve others

Ross told WTOP that service has always been part of her life.

“I grew up working in homeless shelters in the D.C. area with my mom,” she said.

Ross thought she knew what poverty looked like as a result of her volunteer work, she said.

However, she was shocked by what she observed in the communities where she worked as a reading and math teacher to second and third graders during the spring semester of 2018.

“I was really, really struck by the destitute poverty I saw when I was working in the townships and by people in the country who were the majority and who looked like me. It was a very overwhelming reality for me at times, especially working with the kids and … on the bus ride to the township to teach. I’m passing homes that are like shacks and are barely being held together, and probably have hundreds of health code violations. Just realizing that where the kids I was teaching were living was overwhelming and a stark reality for me.”

But Ross also noted that while those students may have been some of the poorest she has taught, they were also the happiest.

“That zealousness and ability to just be so joyful despite the circumstances that they were going through on a day-to-day basis was something that I really learned from and took back with me … to the states,” said Ross. “Just that perspective of understanding, despite what’s going on, being happy and showing love and being joyful — I learned that from my kids.”

Ross said she may have been guilty of seeing service as more of a one-way street before leaving for South Africa. That changed during her time abroad and from her experiences teaching in the Nyanga and Manenberg townships through a program called SHAWCO, which is an organization led by students at the University of Cape Town.

Ross blogged about her experiences. Her semester abroad has influenced how she thinks about youngsters who participate in “Written in my Soul,” the writing program Ross founded at a Miami-area elementary school when she was a sophomore. The organization aims to teach youth from socioeconomically challenged backgrounds healthy self-expression using poetry. The program has expanded to a couple of schools and community centers in Miami.

“I’m [now] conscious of the fact that it’s a mutual exchange and not just my volunteers and I going out and providing a service to a community … but being open to the fact that there is a lot I can learn from the people I’m serving as well. I think it’s more so a mindset, and it’s something that I’ve tried to share with my volunteers as well. When you look at it like that, it kind of takes away any sort of savior superiority complex that could be associated with service.”