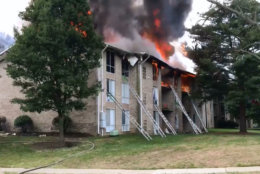 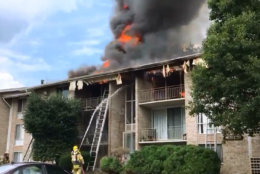 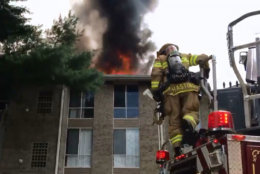 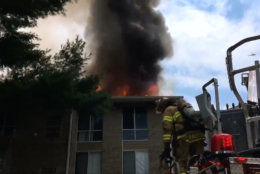 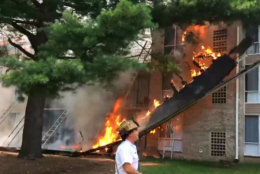 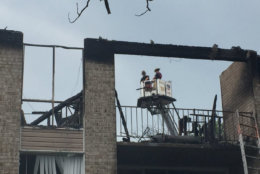 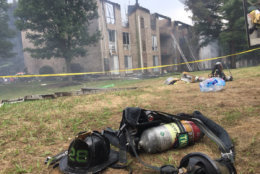 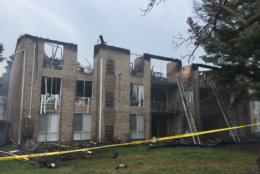 WASHINGTON — Eleven families have been displaced after a large fire tore through an apartment building in a sprawling Greenbelt, Maryland, complex, officials in Prince George’s County said.

The fire broke out inside a three-story apartment building in the Franklin Park apartments in Greenbelt shortly before 1 p.m. No residents or firefighters were injured in the blaze, said Mark Brady, the public information officer for the Prince George’s County Fire Department.

Officials estimate $250,000 in damages from the fire. The origin of the fire was an apartment on the third floor with a cause of the fire remaining under investigation.

The Red Cross reports that 11 families have been displaced due to fire and water damage and is providing assistance.

The fire caused part of the building to collapse and gutted 11 units — nine of them occupied.

The department received numerous 911 calls about the fire starting at 12:45 p.m. and it took crews about 30-40 minutes to put out the bulk of the fire, Brady said. When firefighters arrived at the scene of the fire, they cut a hole in the roof of the building, which stopped the fire from spreading to adjoining buildings, he said.

At its peak, the blaze was a two-alarm fire. About 75 firefighters responded to the fire, including some from neighboring Montgomery County, Brady said.

Crews are still investigating the cause of the fire. Residents of the building that caught fire have reportedly said they smelled gasoline on Thursday — the day before the fire broke out. Brady said crews had been called to the apartment building and determined the smell came from a lawn mower in a first-floor apartment. Brady said the cause of the fire and where it broke out remain under investigation and it’s not clear if the gasoline smell is related to the fire.

The complex was formerly known as Springhill Lake and was reputedly once one of the largest garden-style apartment complexes on the East Coast.