WASHINGTON — Prosecutors say racist postings found on defendant Sean Urbanski’s phone, and his membership in the Alt-Reich: Nation Facebook group are “relevant and probative” in proving he fatally stabbed a black student visiting University of Maryland.

Urbanski, 23, is charged with the May 20, 2017, murder of Richard Collins III, a Bowie State University student who had been recently commissioned as a second lieutenant in the U.S. Army and was set to graduate days later. At 3 a.m., Collins and two friends were waiting for an Uber at a bus stop.

In a court filing, Prince George’s County State’s Attorney Angela Alsobrooks said that evidence “tends to prove a material fact, that is, that the Defendant purposefully chose to stab Mr. Collins, over anyone else at the bus stop that night, because Mr. Collins is an African American.”

Soon after his arrest, university police said Urbanski was a member of the racist Facebook page. When Alsobrooks added a state hate crime charge, she said prosecutors were convinced Collins was murdered because he was black, but didn’t elaborate.

In the new filing, Alsobrooks said while motive isn’t an essential element of first degree murder, jurors are able to consider it in determining guilt or innocence, or choosing between first and second degree murder.

“Motive is an essential element that the State must prove in order to secure a conviction under the hate crimes statute,” Alsobrooks added.

Prosecutors have said they intend to seek a life sentence with no chance of parole for Urbanski’s murder charge. The state charge of hate crime resulting in death carries a maximum sentence of 20 years.

Federal hate crimes involving murder could make a defendant eligible for capital punishment, but the FBI and federal prosecutors have not said whether they intend to file a federal charge.

Prince George’s County prosecutors have not revealed the specifics of evidence gathered that would prove Urbanski is a white supremacist.

In the new motion, Alsobrooks said the contested digital data “elucidates a statement uttered by the defendant just before he stabbed Mr. Collins.”

Contacted by WTOP, Alsobrooks spokesman John Erzen would not say whether Urbanski made additional statements regarding Collins’ race, before allegedly stabbing him.

Urbanski’s attorney Bill Brennan did not immediately respond to a request for comment. Trial on the state murder and hate charges is set for July. 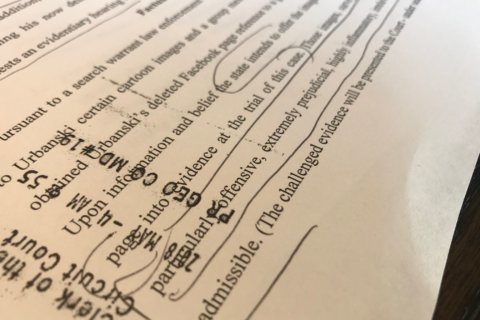