The tweet, which has since been deleted, stated that schools would be in session Wednesday through Friday. 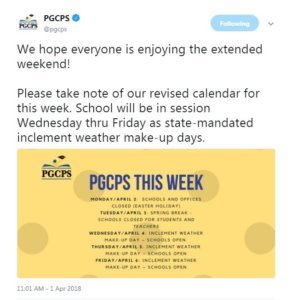 Due to snow days and other closings related to weather, the county’s spring break had been cut from a full week to just two days.

A motion to restore spring break to a full week was passed last week by the Prince George’s County School Board.

At the Maryland General Assembly last week, lawmakers approved a bill allowing school districts to extend the school year by five days without state approval. The House passed it as emergency legislation, so that it can take effect immediately upon becoming law.

The Maryland General Assembly appears set to pass the bill, as both the House and Senate have passed the measure. Because of a House amendment, though, the legislation must go back to the Senate for final approval.

The Senate is expected to accept the amendment and send the bill to Gov. Larry Hogan, whose spokesman said he will sign.