It’s not known if the two victims were students, and while a motive hasn’t been publicly released, police are confident an arrest will be made.
Listen now to WTOP News WTOP.com | Alexa | Google Home | WTOP App | 103.5 FM
(1/2) 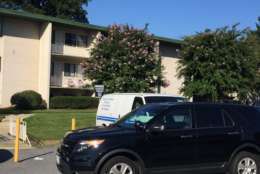 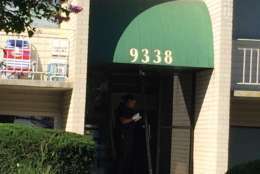 WASHINGTON — One man was fatally shot and another was wounded early Sunday in College Park, Maryland.

The men, both in their early 20s, were shot shortly before 5:30 a.m. inside a residence at the Seven Springs Apartment Complex on Cherry Hill Road. That residence is located inside a building that’s in the back of the complex, overlooking a farm.

One of the victims died after being taken to the hospital; the other is still listed in critical condition.

Police have not identified the victims, but a neighbor said three women were living in the apartment where it happened.

Several people living near the building where the shooting happened, as well as one neighbor who said he lived across the hall, woke up this morning with no idea that a shooting had occurred. They said they didn’t hear anything before, during or after the incident.

But that doesn’t mean the case is stalled.

“We do have witnesses,” said Harry Bond, a Prince George’s County police spokesman. “They are talking with investigators right now.”

It’s not known if the two victims were students, and while a motive hasn’t been publicly released, police are confident an arrest will be made.

Several crime scene technicians were working inside the apartment through the morning, and investigators were also seen dusting doorways for fingerprints.

“I’m pretty confident in our detectives in solving this case,” Bond said.

Below is the general area where police say the shooting occurred.