Olawunmi Akinlemibola, who graduates next week, said her choice was about an opportunity not only to test herself but also to indulge her curiosity.
Listen now to WTOP News WTOP.com | Alexa | Google Home | WTOP App | 103.5 FM

WASHINGTON — Princeton, Harvard, Cornell — those are just some of the 14 schools that accepted 18-year-old Olawunmi Akinlemibola, a DuVal High School student from Prince George’s County.

So which did she choose?

The graduating senior explained that its quarter system gives her the opportunity to test herself and indulge her curiosity.

“If you’re somebody like me, who can’t make up their mind on what they want to do or finds everything interesting, you can take classes that are, like, outside of your major,” Akinlemibola said.

She was also drawn by the activism of students on the Northern California campus. During a visit, she noticed demonstrations going on, and she said she found them inspiring.

“Students there care about the current climate and the current issues of the United States and they’re not sitting down and doing nothing,” she explained. “They’re actively participating.”

Will being so far from home give her any concern?

In a tone that clearly indicated she didn’t mean to brag, the teenager said: “They actually gave me a travel grant, so I don’t have to pay. … I have money for plane tickets.”

Though being far from home will be hard, she’s used to the ache that distance creates: Her dad is here in Maryland, but her mom, who stays in constant touch, is in Nigeria with her two little sisters. While Akinlemibola said she might become more independent by necessity, she added, “I’ll still probably be calling — like, every second.”

Asked what it will be like to see such a stellar student leave the DuVal hallways, Kline said there may be the kind of emotion that requires tissues, but it will be mixed with excitement for whatever the future holds for a truly stellar student.

“It’s definitely going to be a proud moment for me, seeing her walk across the stage,” Kline said. 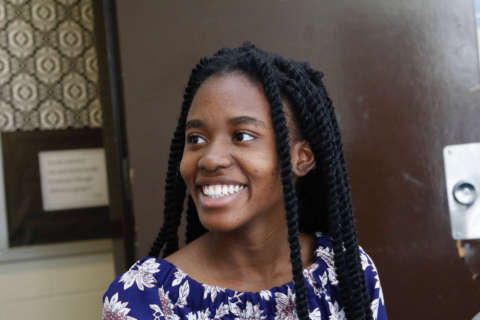