LANHAM, Md. — Not many questions leave 18-year-old Olawunmi Akinlemibola stuck for an answer. But ask the Prince George’s County resident where she’s going to college, and she can’t tell you — yet.

That’s because the Duval High School senior has a lot of good options: She’s been accepted by more than 14 schools, including Harvard, Princeton, Stanford, Duke and the University of Pennsylvania.

Many of those offers come with scholarships — some will cover the entire cost of her four-year education. So between now and May 1, the deadline for many acceptances, she has plenty to consider. 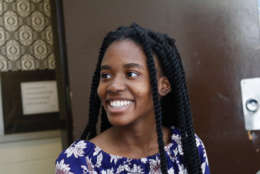 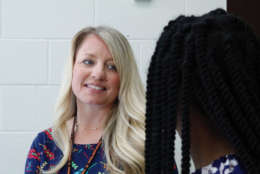 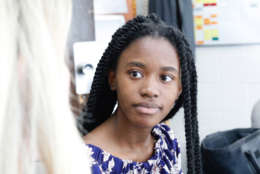 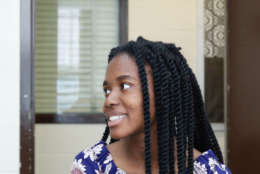 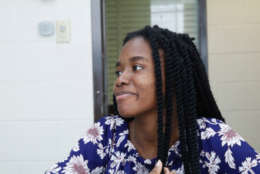 She has been accepted to the following schools:

Her counselor, Stacy Kline, has a caseload of over 300 students at the Lanham, Maryland, high school. At the start of the school year, colleagues told her she had a standout in the group.

Kline said that was an understatement, and referred to Akinlemibola by her nickname. “Wunmi is one of the top students I’ve ever had the privilege of working with,” Kline said. “And I say ‘privilege’ because she’s someone who has taken classes far beyond the ones I’ve taken — even in my master’s programs!”

Curiosity is what drives Akinlemibola, who said she’s always been a voracious reader.

“I studied a lot because biology was my thing. Then I joined mock-trial, and that became my thing.”

And it’s that breadth and depth of curiosity that’s helped her to succeed. Another factor is the school climate at Duval. “It is very cool to be a brainiac at Duval,” she said.

Akinlemibola joked that she’s become a celebrity in the hallways at the Lanham school — but there’s a bit of truth there. Her success is something she shares with classmates, offering study tips and strategies for tackling the classes that may prove difficult.

“It’s easy to do well in the things that you like,” she said.

But for those classes that prove to be stumbling blocks, or that are just unappealing, Akinlemibola advised that it helps “if you can just see them as steppingstones to get to where you’re going.”

Akinlemibola, who lives with her father in Prince George’s County, said her mother didn’t go to college and that her father works as a security officer. But she and her two little sisters have always enjoyed learning.

Her mother, she said, will likely join the rest of the family in Prince George’s County soon, and that when her little sisters reach high school age, they will outshine her.

“Oh, they’re much smarter than me!” she said.

‘I didn’t think I was going to get in anywhere’

Howard University and Stanford were among the first schools to let Akinlemibola know she’d have a spot on their campuses. She admitted that she was a bit overwhelmed by the acceptance to Stanford, “because I didn’t think I was going to get in anywhere, so … I cried.”

Kline is as excited as Akinlemibola by the opportunities the teenager has to choose from.

This is Kline’s first year as a counselor at Duval, but she’s been a high school counselor for nine years. “And I can honestly say that she is the first student that has been accepted to the amount of top-tier schools that she has, but also to the Ivies,” Kline said, referring to the Ivy League schools like Harvard and Princeton.

So, while all those academic offers have yet to be sorted out, Akinlemibola is juggling a more immediate challenge: what to wear to the upcoming prom.