UPPER MARLBORO, Md. — A man charged in connection with an attack that left a police officer dead last year appeared in court in Prince George’s County, Maryland, Tuesday and was ruled competent to stand trial.

The decision came after Michael Ford, who is facing dozens of charges including murder, attempted murder and assault, underwent a mental evaluation.

Ford’s attorney did not contest the ruling, but he argued that Ford does suffer from mental illness.

According to prosecutors, Ford fired a gun at a Prince George’s County police station in Landover, Maryland, in March 2016, prompting officers to return fire. During the chaotic exchange, an undercover plainclothes officer, Jacai Colson, was killed by a fellow officer who shot him by mistake.

The officer who fired the fatal shot, Taylor Krauss, was not charged in the incident.

Ford’s two brothers, Malik and Elijah Ford, are accused of driving Ford to the police station and using their cellphones to record the attack so they could later post the video online. Both brothers face a long list of charges including attempted murder and assault.

Defense attorneys have previously said that Ford was trying to commit suicide by getting officers to shoot at him. On Tuesday, Jones said that Ford did not necessarily know what he was doing at the time of the incident.

“He wasn’t medicated or anything, so in my opinion he wasn’t criminally responsible,” said Jones.

Prosecutors were not buying that argument.

“We couldn’t disagree more,” said Prince George’s County State’s Attorney Angela Alsobrooks. “We believe, based on the evidence that we have, that Mr. Ford knew exactly what he was doing.”

“But for the shooting that he initiated at that police station, Jacai Colson would be alive today,” she added.

All three Ford brothers will go on trial separately, but prosecutors said they do not yet know the trial dates because motion hearings in the coming weeks could delay the process. 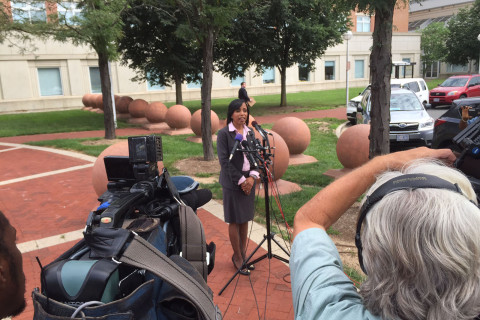