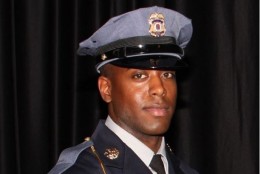 Bagpipes played as Colson’s family arrived at the First Baptist Church of Glenarden for his funeral. They embraced members of the county police department before entering the church to remember Colson’s bright life.

Officers from all over the D.C. area and several states attended the funeral, in solidarity with the Prince George’s County Police Department. Many police cruisers had black bands stretched across their markings in memory of the four-year member of the department killed by friendly fire during a gunfight on March 13.

“Jacai was always one of those people who made light of heavy situations,” said Joel Bolton, a friend of Colson’s from college.

Maryland Gov. Larry Hogan told those gathered that though Colson’s life was just beginning, he left a lasting mark as a leader who was always ready to lend a helping hand.

“When many run from danger and adversity, Jacai ran toward it,” Hogan said. “Where others would back down in fear, he stood on the front lines. The legacy of Detective Jacai Colson is that of a beloved son, grandson and brother and it is the enduring legacy of a proud, brave member of the thin blue line.”

Colson, 28, was shot and killed defending other police officers during an exchange of gunfire outside of the District III station in Landover.

The suspect, 22-year-old Michael Ford, started shooting at the police station when Colson, an undercover detective in plainclothes, arrived on the scene.

Colson later died from his injuries.

Ford faces more than two dozen charges including second-degree murder for his role in the shooting and death of Colson. Police say his brothers Malik and Elijah Ford helped Michael Ford plan the attack and also recorded the shootout. They were also charged in connection with Colson’s death.

Colson was a native of Delaware County, Pennsylvania, and will be buried there on Monday.

The Associated Press and WTOP’s John Aaron contributed to this report from Upper Marlboro, Maryland. Jamie Forzato contributed from Washington.